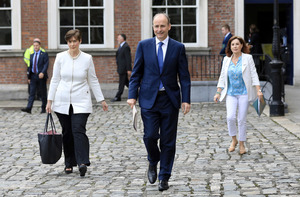 We’re being told that over recent weeks that Ireland has the fourth fastest rising percentage in Europe in new developing COVID cases. On first exposure this appears a worrying statistic but ultimately it is a pretty meaningless one.

As a comparison between countries, when countries are operating from different bases, it does not tell us a whole lot.

The seven day and fourteen day averages are more telling. From these we can see that things are going in a wrong direction and that we do need to act differently.

The figures remain far short of the peaks we had seen in April/May, but who of us wants to go back there?

What seems to fraying is the idea of an us. For this political responsibility has to be accepted.

We are now eight months into a global health crisis. We know a lot more about this virus than we did, though not yet nearly enough. The governments of many countries have adopted different strategies, some more successful than others.

Some of the more successful governments, such as New Zealand, have had certain geographic advantages. Failures have occurred, and they have been many, in many countries.

In Ireland we have fought hard but find ourselves at the wrong end of the World table with statistics such as COVID deaths per million population.

These failures, while above the World average, have not been of Trumpian proportions. But failures there have been.

It may be that some time will pass before we learn the extent of these failures. How we have handled nursing homes reflects badly on us. The dangers that existed were not responded to quickly enough. The resources that were needed were not provided sufficiently or in time.

We are in danger of repeating these mistakes with Direct Provision centres. The level of risk we are exposing those in these centres, in a type of provision that should not exist, is unacceptable.

And then we have the meat factories, which seem to be evolving into something of a metaphor for a more meek, bleaker Ireland. Poorly paid workers with even worse working conditions, exposed to maximum risk so that the rest of us have cheaper food.

Other problems have arisen because of our reactive response to this virus. Those with other health conditions have been made wait, creating a back log to be cleared that may take a considerable time, causing even greater stress to those suffering.

It is in this context that government is so anxious to see schools re-opening, that some may see as being in haste while not being properly thought out.

There is valid reason in seeking a resumption of education. Learning is an essential and overriding purpose of schools. So is socialisation.

It could be the cruelest irony of all that while for children the health impacts of COVID may be marginal, the mental health effects could be devastating.

I see it with my granddaughter. She hungers for other kids to interact with. The longer we avoid making that happen the harder it will be to catch up.

It won’t be easy. Some openings will be postponed. Some will open then close in response to local outbreaks. It will be infuriating. Despite this it is something that needs to happen. Something we need to make happen.

Earlier: “Most Of Our Homes Are Not Controlled Environments But Schools Are”

Dan Boyle: Once More Into The Bleach

8 thoughts on “Dan Boyle: We Don’t Need No Education?”