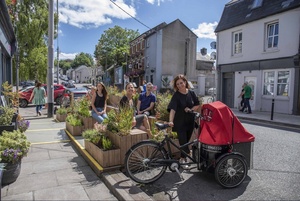 From top: A ‘Parklet’ in Douglas Street, Cork. Cork City Council is seeking to provide up to 10 more parklets in the city centre and wider city; Dan Boyle

Douglas Street is in the heart of my electoral area. As a child I played there. Growing up it was part of my etched out route in and out of town.

One of its spokes, Nicholas Street, was our Alpe d’Huez that I conquered on a tiny Triumph bike. These days the breathlessness kicks in a quarter the way up when I am walking.

For fifteen years I ran an office there as a councillor, a TD and senator. It was a good location, close to the city centre. It was a microcosm of city life where people lived and businesses sought to prosper.

As someone who grew up in the inner city, my choice of office was deliberate. Not only did I want it to reflect what I believed I was, I saw it as undermining a perception by some of who The Greens were seen to be.

Once there were twice as many pubs as are there now. Those that remain, Coughlans and Fionnbarras, are iconic. The space that once was the trend setting gay bar, Loafers, stays sadly empty waiting its next social challenge.

The imposing convent and girls secondary school that bookends one end of the street, has been spectacularly reimagined as Nano Nagle Place. What once had been inward in its structure and its approach, has now been made into a public space of myriad use.

Douglas Street has at times been neglected. It struggles with rat run traffic due to its closeness to the city centre. Despite this, for those who live and work on the street, there is tremendous pride and spirit.

Every year a street festival is organised, where the traffic is removed, showing the fantastic potential of the area.

Last year into this evolving community an art project was mooted. The support of Cork City Council was necessary to progress the idea. Initially that support would not have been total.

Some local councillors bemoaned the loss of parking spaces to facilitate the project. To meet these objections the installation was defined as a pilot project, meant to have a short shelf life.

The project was the creation of a parklet. This was an elaborate wooden bench strewn with compartments to allow for the growing of plants.

It was meant to be in place for a number of months. Affection for the parklet, and what it represented, soon grew. A petition was gathered to argue that it be made permanent. As a local councillor I tabled a motion to the City Council to the same effect.

The sense of community that has been built up by skillfully putting together a few pieces of wood, has been a wonder to behold.

The parklet has become part of the furniture of Douglas Street, in the very deepest sense. It is no longer thought of as being ephemeral. It has become a pioneering piece of social infrastructure that many other places want to emulate.

This week Cork City Council is responding to this demand by offering to construct ten new parklets throughout the city.

Soon the parklet on Douglas Street will no longer be unique. But it will always be special. It will be so much better having parklet problems in the city than having parking problems.