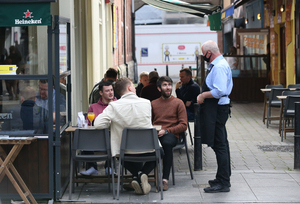 Throughout the pandemic crisis we have heard much commentary lauding essential workers and, in many instances, pointing out the poor wages and working conditions they suffer.

The following looks at the hourly wage levels of occupations the Government listed as ‘essential work’ in the market economy (largely private sector). 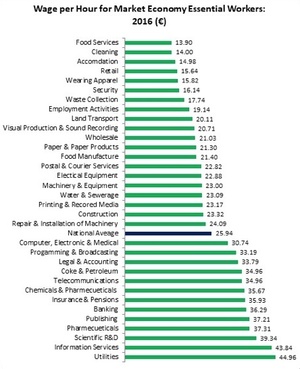 There are a number of caveats regarding this table. First, though this data is from 2016 (the last year for detailed occupations), the focus here is relative wages which are not likely to have changed much in the last three years.

Second, the categorisation of essential work does not easily fit into occupational wage data, so this should be treated cautiously. For instance, only some retail, accommodation and food services were listed as ‘essential’; similarly, with construction. Nonetheless, the wages for the essential parts of these categories are not likely to be much different.

Given these caveats, what we find is a wide disparity in wages among essential workers.

Occupations dominated by professionals are, unsurprisingly, pad well. The problem lies in the low hourly earnings in many of the essential occupations. This is compounded by poor working conditions:

Many of the low-paid sectors are marred by precarious contracts and involuntary part-time work (i.e. part-time workers who want but can’t find full-time work). This results in a widening gap when weekly income is factored in.

Higher-paid workers will enjoy benefits such as sick pay, company pensions and maternity top-ups – benefits which most low and average income earners are denied. These features widen the gap even further.

This throws up not only a wide income gap, but a gap in social security and living standards.

In a recent examination of the minimum wage the ESRI’s Paul Redmond writes:

‘Finally, there are fears among academics and policymakers that the Covid-19 crisis could exacerbate inequalities in health and wages. The evidence on the impact of minimum wages on inequality is particularly relevant at this time . . . the 2016 increase in the Irish minimum wage was associated with a reduction in wage inequality, with the ratio of wages in the 90th and 10th percentiles falling by 8 per cent . . . a minimum wage is particularly important during a recession; by preventing the wages of the lowest paid workers from falling below a certain level, wage inequality stays relatively low. Given that the Covid-19 crisis will result in an economic contraction, the minimum wage may be an important policy to counteract inequality.’

This puts the paltry 10 cent increase proposed by the Low Pay Commission into perspective.
However, the issue goes far beyond a statutory wage floor. Ireland suffers from a high level of wage inequality. 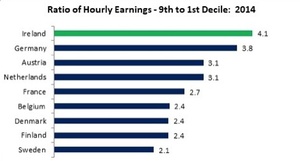 In Ireland, high income earners make more than four times the wage of low-income earners. In other EU countries the gap is much less, indicating a fairer distribution of wages.

It is worth noting that the three countries with the least amount of wage inequality – Denmark, Finland and Sweden – don’t even have a statutory national minimum wage. They drive wages and greater equality through collective bargaining and strong labour rights.

Professor Frank Walsh of UCD showed how this works in a paper he gave at the Nevin Economic Research Institute’s recent labour market conference.

He found that, when controlling for age, education, gender, weekly hours, job tenure, occupation and industry, workers in trade unions earn 12.2 percent more than their equivalent counterparts who are not in unions. And this premium is more pronounced among low and average income earners:

‘There is a substantial Trade union Wage premium on average and across the distribution . . . The evidence suggests that trade unions lower wage inequality.’

Unfortunately, our legal-industrial institutions do not vindicate workers’ right to collective bargaining. They allow employers a veto over worker’s ability to bargain collectively.

Of course, there is more to reducing wage inequality than collective bargaining and strong labour rights. Taxation, anti-discrimination policies, strong state-financed in-work benefits and a general social democratic political culture are all important ingredients as well.

But there is another dimension, something less tangible but nonetheless important; namely, how a society values work. Chris Johns makes an important point when discussing the recent sweatshop scandal of Leicester factories that supply Boohoo, the on-line retailer of fashion clothing, where low pay, poor working conditions and exploitation of migrant labour are the foundations of Boohoo’s business model.

‘The factories concerned were mostly suppliers to Boohoo rather than directly owned: integrated supply chain management is a feature of many of today’s successful industries . . . [Boohoo] senior directors knew about these issues last December but “didn’t feel responsible for them” . . . The reason given goes to the heart of all this: workers in Leicester were so far down the supply chain they were “invisible” to Boohoo’s senior management. And to others who also should have known better: the local council, tax authorities and the health and safety agency.’

It’s a powerful insight – that the low-paid and the exploited are invisible.

Do we see the cleaners and the waste collectors? Even when we look at the workers who check out our groceries and bring us coffee to our table, do we see them? Do we fully appreciate how poorly they are paid, how precarious their work contracts can be, their lack of security that many of us take for granted?

If we are to take wage inequality seriously, then we all have a role to play regardless how small: as a participant in politics (even just voting), as a consumer, through social media, wherever we can engage. Wage inequality and exploitation require an all-of-society effort.

The first step is visibility as a prelude to concerted industrial and political action. 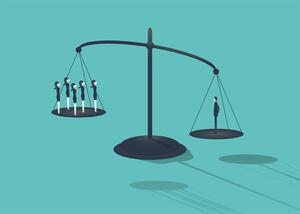 4 thoughts on “Michael Taft: Are You Essential?”