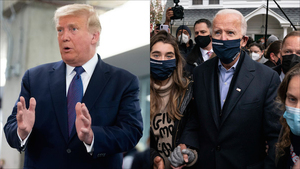 The Joke
(after Walter Benjamin)

A barrel of industrial waste poured into a suit
donated by a casino owner who knows people
with a tangerine tea towel tossed strategically on top
because it was the only available metaphor for hair
was running for re-election as CEO of South Canadia
against an old coat with holes in it.

The barrel of waste was trailing
histrionically among professors emeritus
whose brains were in the process of being dismantled
by lethargy and time, and among those
who, as and when the stock market permits,
take a year off to celebrate their dividends
by doing good works among brown people in far countries
not lucky enough to have stock markets or dehumidifiers.
Such people agreed with each other that the barrel of waste
made the raging boil on the nation’s privates
way too obvious, and hoped by throwing
the old coat over it they could again
forget it was there.

The barrel of waste said the old coat couldn’t deliver
on the promises he wasn’t making,
and maintained good leads among morticians,
pimps, and police informants
and had the total bastard vote
ninety nine percent sewn up –
in essence everyone except the late John DeLorean
and perhaps Alan Dershowitz.

There was a minority faction who wanted the boil
on the nation’s privates given free antibiotics, lanced
with a big needle imported from Sweden
and then cauterised. But most people found
though they were in favour, in their hearts,
of lancing the boil,
in practice they were for
allowing the boil to grow redder, angrier, more toxic
under the old coat with holes in it.

So the minority extremist faction
who wanted the thing treated
were sentenced to the echo chamber
to argue about whether the old coat
with holes in it really
was the lesser evil.

The midwife of history,
grown bored with the year twenty twenty,
had decided to play one of her jokes.

Ode To The ‘Far Catholic Right’

12 thoughts on “Waiting For The Punchline”