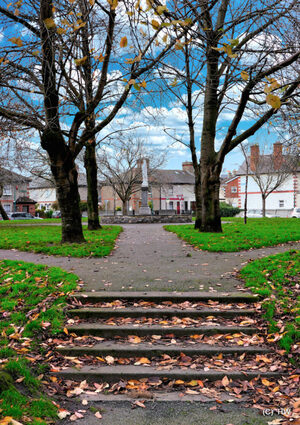 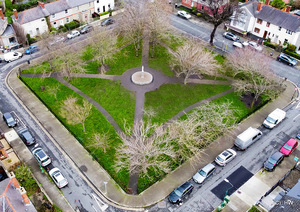 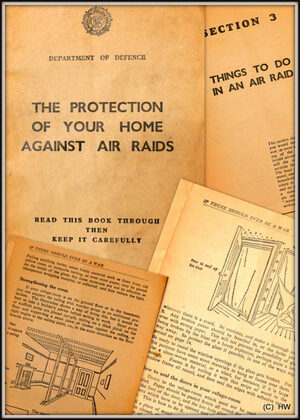 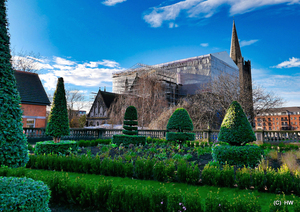 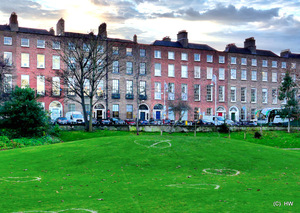 I love walking through Dublin parks. City parks are a vital place of respite and rest. It’s good for the soul to take a leisurely stroll among the peaceful trees and greenery to unwind, perhaps take a seat and watch the world go by. Dublin’s parks have many historic features of interest that are hiding in plain sight but first let us point out where some these interesting features are located.

How about that nice hill in Merrion Square park where young and old run up and down at play, or the location of the normally beautiful view of St. Patrick’s Cathedral from the Bride St. side of Patrick’s park. I say “normally” as the Cathedral is being re-roofed and covered in scaffolding. Or that lovely little park in Oscar Square in the Tenters area in Dublin that has steps at its four corners? They all have one thing in common and their history should be told.

When World War II occurred Ireland being neutral declared an “Emergency”, perhaps ‘one of the understatements of the century. The population needed to be protected. A volunteer Corp known as the Air Raid Precautions was set up, generally referred to as the ARP. It was to be controlled by the local authorities, county councils and city councils.

Thousands volunteered. Dublin Corporation, being the largest of those authorities had full-time officials running the ARP. They produced a copy of a British publication “The Protection of your Home against Air Raids” that was supplied to every home and a decision was taken to build some public air raid shelters for fear of aerial bombing by Germany.

If you are enjoying the view of St. Patrick’s Cathedral from the Bride St. side of the park you are standing in the location of the original shelter. The above photos of the parks will give you a general idea where the bomb shelters were located.

Many areas around Ireland were bombed by Germany during WW II. Three bombings in Dublin of note were: –

The bombing in Rathdown park Terenure and on the corner of Lavarna Grove and Fortfield Rd on the 2 January 1941 with two homes destroyed, some injuries and damage to nearby homes.

The bombing raid on the morning of the 3 January 1941 in what was then Donore Tce. in the South Circular Road area. Fortunately, there was no loss of life but twenty people suffered injuries. There was extensive damage to property, three homes were completely destroyed, many more were damaged along with a nearby Jewish synagogue and a Presbyterian church.

And worst of all, the 1,000-yard swathe of destruction caused by two German aircraft killing 28 people with hundreds injured in the North Strand area on 31 May 1941.

So, the next time you are in those parks enjoy the fact we are living in more peaceful times and the parks now have more children’s playgrounds than bomb shelters.