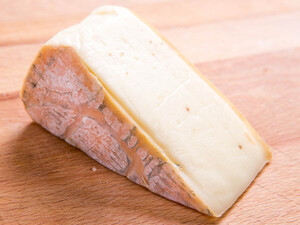 Of course at Christmas Life Of Brian (1979) keeps coming to mind. “Blessed are the cheesemakers.” “Maybe he means makers of all dairy products”. There is a town in a country where I used work. To get there you did not ask ‘how far’, it was ‘how long’. But there was a farm there, originally set up by a Belgian, but had since passed it back to his workers after he became too old to manage it. Before he passed, he taught them how to make cheese.

They also had a hostel, and when I say that people would endure the hours on those roads to come, stay overnight, drink the excellent beer from the local brewery, just for that cheese, please do not think I am exaggerating.

The cheese was not unlike Edam in flavour, but he had no wax, so he wrapped them in a muslin-like fabric, and they developed a hard crust, with the inside being the softer texture. An Italian colleague loved the rinds: he would grate them like parmesan whenever he made pasta, simply cutting off any mold that developed. Nothing of the little rounds was wasted. I do not recall what happened to the muslin. Most likely taken by the housekeepers for their own use.

Weeknights were fine – you could hardly get in the door at weekends. I once had to sleep (quite comfortably, I assure you. I still have the sleeping bag) on the floor of the common room as all beds were taken, and my important guests had nabbed the couches. Once or twice I had to stay at the nun’s convent nearby. Basic, but clean and safe. Not so much beer though.

I had met them years before that, when I was travelling alone. He was only building the guest quarters, I slept in the same room, but that time on a couch. Everyone ate around the same table. His wife was ruthless as the workers came in if they had not taken off their boots and washed their hands outside. But she made sure there was food enough for all, and would at the end send one of the workers off with food in insulated dishes for the guards and workers who could not attend the table.

And that first night he told me about his passion for cheese. It came about simply because when he started the farm he had no refrigeration, and the milk from his cows would go off.

He tried yoghurt, but without pasteurisation and refrigeration, people got sick. So he turned to cheese. On one of his visits back to his home he visited local dairies and commercial cheesemakers. He was rebuffed a few times, but one told him he was asking in the wrong place. He needed what I guess we now call artisanal makers, or farmers. He eventually found a farmer who made small batches, mainly for family use, as the dairy took most of their milk and that was their income.

So he learned from this family, where when the children came home, one of their chores was turning the cheeses as they matured. At home, I had to clean the grate and lay out the firebox of the range, twisting yesterday’s newspapers into little firelighters. Or maybe a different day it was laying and clearing the table, or the washing up team. I thought turning cheeses sounded more cool, until I saw this man’s operation. It looked like hard work, not so much for the effort as the monotony and the amount of it, and the care that needed to be taken.

He told me this over several glasses of Chivas Regal – the real stuff. Knock-off could easily be obtained, but blindness is a risk. He told me he was sure one of his staff sold his own empty bottles for that illicit dealing. He was not worried about that aspect, but was about the dangers. But lectures did not help, although I do recall his admonishment not to eat yoghurt in that country.

I always brought him a new bottle every time I traveled, varying the whiskeys, introducing him to Irish ones he had not tasted. He really liked the Jameson, Black Bush went down well, but the 12 year old Bushmills malt went down better. I never tried Paddies on him. The last one before his passing was a Middleton. On that night, we talked rugby.

And had it with cheese and Belgian mustard, and slices of his own farm apples.

31 thoughts on “What A Friend We Have In Cheeses”