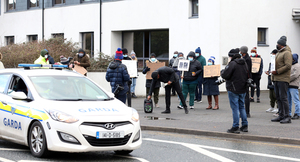 The Case of George Nkencho

If this boy had been more prudently
dropped into life on, say, a street
with trees that throw out their annual yellow
to make a welcome parade for the sun;
had as childhood neighbours a Circuit Court Judge
whose front door had no letter box,
a Garda Chief Inspector with an opinionated
and over-confident dog;
kicked a ball up and down summer evenings,
dead apart from the occasional well behaved bee,
with the boy next door (but one) who blossomed
into a political correspondent
and now gets to make up truth,
another way would’ve been found.

But for coming at Gardaí
with a chemical imbalance,
what some people are calling
a machete
and a totally inappropriate
post code,
the only sentence
was that ethically administered,
democratically accountable,
bolt action firing squad.

The eminent and learned
bottoms we employ to sit
on the inquiry into this
need not fret the task ahead of them.
For their report is already written.

32 thoughts on “‘Another Way Would’ve Been Found’”