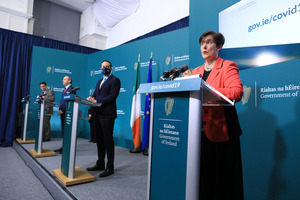 When, in five- or ten-years’ time, we look back on January 2021 will we think of it as the month:

…when President Trump launched a failed coup that resulted in his being banned from office;

…when a Covid-19 peak drove authorities to get serious about speeding up vaccinations or,

….when Marks & Spencer stores in Ireland ran out of packets of Percy Pig.

I suspect, in a darkest hour is just before dawn way it will be a mix of Trump and the vaccine. Hopefully, we will look back and see this as the inflection point when, to quote Arnold Schwarzenegger’s excellent video message, a jailed or exiled Trump became as “irrelevant as an old tweet.” Similarly, we will see this as the month when Covid-19 was arrested in in Ireland via a pincer of suppression and mass vaccination.

While I hope this is how our future selves will see things, I know there is a cohort of maybe 70,000 young citizens for whom January 2021 will still invoke memories of doubt and uncertainty. I refer to the 6th year students who want to know what will happen with this year’s leaving cert.

An old political maxim states: Standing in the middle of the road is very dangerous; you get knocked down by the traffic from both sides.

The maxim is usually attributed to Maggie Thatcher, but that is not the only reason I am unconvinced by it. It is very possible for someone, with their wits about them, to walk along the line in the middle of a standard road or street, never mind the big central reservations the have along carriageways.

The political unfortunates who get hit by traffic from both directions are the eejits who spend less time staying in the middle, and more time veering left and right of it, trying to cover more ground.

This, in part, is what the government did on the leaving cert last week. By deciding one thing and then deciding the opposite, they managed to rile all and please none.

I have no doubt the original decision to have three-day-a-week school sittings for leaving cert students was made with the earnest hope of ensuring the leaving cert exams could go ahead, in person, in the Summer… but… while the government’s motivation was commendable, the execution was lamentable.

I know from talking to the various Fianna Fáil TDs who are still willing to take my call, that they were inundated with calls, texts and emails from parents, teachers, and local unions officials all concerned by the prospect of going back into classrooms today.

The same TDs also reported that no sooner had the government reversed its position than their phones were erupting with messages from almost as many parents and students concerned that not holding classes will disrupt their exam preparations.

It is impossible in politics to please everyone, but as government TDs and representatives learned this week, it is quite easy to piss-off everyone.

I have no informed view as to whether the leaving cert should proceed as it traditionally did in previous years, or as a teacher-assessment as happened last year. I am agnostic on both options. But I do know a few related things.

The first, is that attacking teacher unions for voicing legitimate concerns is not a smart political move. Especially when: (a) your government does not give them the reassurance or access to medical data proving that schools are sufficiently safe, and (b) your Health Minister tells teachers in December 2020 that they will be 11th in his 15-phase Vaccine Allocation Strategy.

The second thing I know is more pertinent to sorting out this problem. Leaving cert students want and need certainty, and they need it now. Some of them favour assessment, as many of them favour traditional exams.

They are divided on that, but the critical point that the government must realise is that all of them are united on just wanting to know, one way or the other… and soon. Last week’s, you’re back, no you’re not, exercise only served to add to the stress levels of an already anxious group. Whatever the decision is to be, it should be made soon, very soon, otherwise the government risks annoying everyone, again.

This year’s group of leaving cert students have gone through a very bizarre and surreal educational experience, even more surreal than last year. The 2020 leaving cert cohort had these tensions and extra problems visited on them from a few months before their exams. This year’s cohort have endured them since last September.

They have been in school, attending socially distanced classes, all the while being unable to mingle, hangout with friends, play sports or enjoy any of the ancillary in-school-benefits that, in normal times, ease the stress and tensions of preparing for the leaving cert.

The 2020 leaving cert class clearly faced huge pressures, but it would be churlish not to accept that this year’s class faces even greater ones, including hearing themselves, and other young people, unfairly vilified, both online and in the media, for the Covid-19 spread.

It is not that this year’s leaving cert students know better than the education experts or policymakers whether is it better to proceed with exams or with assessment, but they certainly know what pressures they are feeling and how the uncertainty is impacting them. Their thoughts, their concerns and their needs must be a major element in any decision.

While many areas of public policy making that can benefit from a let’s wait-and-see approach, particularly as some problems to have a habit of sorting themselves out, this is not one of them.

The government needs to focus hard, decide and stick with that decision, even if it discovers, in two-or-three months’ time, that going the other way remains an option. I know there will be a temptation to announce that the exams will proceed knowing that the option to switch to an assessment process remains there as a Plan B. I would advise against this approach as it just retains and maintains the uncertainty.

Standing back from the specifics of the leaving cert conundrum, the government must not allow itself to be excessively worried by opposition taunts on changing its mind or doing a U-turn.

The Scottish First Minister, Nicola Sturgeon has announced several policy U-turns on handling Covid-19 over the past few months and suffered no appreciable loss of support because she has been direct and taken responsibility and owned the changes. She has also benefitted from having her firm leadership contrasted daily with the vague, blame-others, approach of Prime Minister Johnson.

Governments everywhere are playing catch-up as they see struggle to get ahead of the virus, particularly when it does not precisely follow the paths the system modellers suggested. There is no shame in changing course when the event or outcome you planned for and expected to materialise, doesn’t. To quote Keynes: “When the facts change, I change my mind – what do you do?”.

Postscript. Before I finish, I should probably add two more items to the list I imagined in the first paragraph, though we probably won’t have to wait for a year to see if these come to pass.

First: will we see this as the moment when the worm turned on social media regulation with Facebook etc., being treated as a publisher, not just tech platforms.

Second; will we look back and see the Minister for Children’s justified anger at the leaking of the Mother and Baby homes report as the moment that triggered the countdown on this government denouement?

5 thoughts on “Derek Mooney: When The Uncertainty Is More Testing Than The Exam”