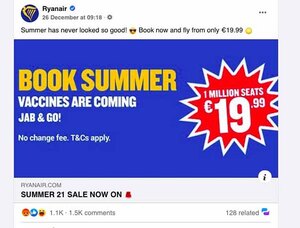 The UK Advertising Standards Authority has told  Ryanair that its “Jab & Go” advert (above) must not run again in its current form.

The watchdog received a large number of complaints about the campaign which told customers “vaccines are coming” and encouraged them to book flights in order to “Jab & Go”.

The ASA upheld the complaints saying that it was “likely that consumers would interpret the phrase ‘vax and go’/‘jab and go’ as an unequivocal endorsement of vaccinating and travelling unconditionally.”.

In response, Ryanair said it would comply with the ruling but disagreed with the decision.

Ryanair went on to claim that the decision meant all advertising for Airlines, Tour Operators, and travel agents for travel or holidays this Easter & Summer should also be banned.

I’ll Do My Ryan In The Rain

The Flights Are Not Going Out All Over Europe