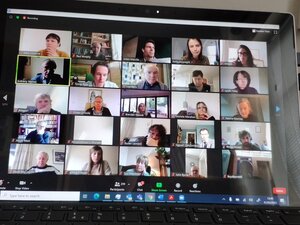 Attending launch of #WeCanBeZero campaign with @ISAGCOVID19. Incredibly @astaines reports that we have less public health resources now than we did a year ago! pic.twitter.com/bTqd19pWbf

Inexplicably jab-happy RISE TD Paul Murphy heralds the launch of the Independent Scientific Advocacy Group’s ‘We Can be Zero’ campaign appealing for a Zero Covid strategy (including even more restricted lockdowns) for the island of Ireland.

Not all zeros wear capes.

Now @JulienMercille explaining how a #ZeroCovid policy would use internal border controls, and a red zones, orange zones and green zones.

He makes point that we currently have an internal plan with 5km limit. Our plan is much freeer.#WeCanBeZero

Why can’t we pick our own colours?