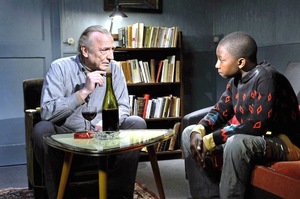 The great Finnish director Aki Kaurismaki is still alive and, given the amount of booze and cigarettes he ostensibly consumes, that is a minor miracle. We are lucky to have him with us still.

In my view, apart from the Japanese director Koreeda, whose film I Wish (2011) about children is as great as Ozu, the highest compliment, Kaurismaki is possibly the last humanist director.

Kaurismaki’s focus  is always on the little people. The exploited Match Factory Girl (1990) working in Lowry-like or even Indonesian work conditions. His films concern those and ageing rock stars doing work for charity or wide boys going to America. Leningrad Cowboys of which there are several films always for the right, if nostalgic, reasons.

At one level, it is an offbeat sensibility; at another level, absolutely central to our culture. The sort of thing only Nordic countries could produce – spiv, hyper-educated sophistication. That focus on the particular human story affected by the political superstructure is what most concerns him. The powerless of ordinary people in the case of state bureaucracy.

His greatest film as great as Koreeda’s I Wish is Le Havre (2011). It is a masterpiece, possibly one of the greatest films ever made, a grand claim, and 90 minutes long, excessive by his standards.

He is a great miniaturist artist. No great political statements, just like Lowry’s matchstick men and cats and dogs, or Bonnard doing family scenes, or Brueghel’s focus on the common peasant wedding. It is the little people that matter.

So Le Havre is about a young, black immigrant child alone and lost in that city of ambiguity, a kind of Greenland to reference Salman Rushdie’s sense of Graham Greene, a half state, a waiting house, a weigh station. A netherland. The film has awful scenes of the way French detention centres such as Songatte work.

The French are often extremists in Gaullist terms and the half weight houses of the detention centres near Heathrow, where I have represented, are more civilised in awful times. Or at least until recently as a campaign is orchestrated to prevent the internment in Portakabins, not different to a prisoner of war-type camp of asylum seekers, in Yarl’s Wood and anticipation of the shape of things to come?

The judges in immigration courts which I have extensively appeared in are often fair-minded but, of course, constrained by a paraphernalia of rules that make no sense in terms of the human condition in present times. Doing their absolute best no doubt in awful times but constrained by an incomprehensible set of rules.

One can have too much faith in the law, as Hardiman J in Ireland often said to me. Why do immigrants flock to the UK or America? Well, the way the question as framed dictates the mediocrity of those that ask it as a question? But, of course, perhaps not now as the deluge of migration is trickling out and constrained intra jurisdictionally.

Yes, the social structures coming from afar to the UK are inadequately assessed. Often awful and inadequate international inspection dictated to by the Schengen treaties and this state-appointed mediocrities of host nations parroting conclusions, far too perhaps readily accepted, dictate that quite clearly.

Economic migrants of frustrated opportunities as a concealment of coercive political and economic persecution are difficulties to disentangle but not for me in some respects. Always important to focus on the human condition.

Thus, in Le Havre, the young migrant is befriended by a dissolute middle-aged man who enjoys far too much wine and makes his money busking in the streets. At one level, it is a kind of rustic idyll and how much it is replicated in practice in this day and age is difficult to work out.

But he goes home every evening to a loving, too indulgent, wife who, at the very least, tolerated him, understands his need for a few drinks and has dinner provided. Why does she like him as, in conventional terms, he is a failure? Well, he is nice and puts his reputation on the line to protect the young migrant at the cost of prosecution by the gendarmes, and the local prosecutor in bureaucratic officiousness looms large and sinister but also charitable. A kind of reverse of the prosecutor in Camus’ The Outsider.

Then he finds out she is dying of cancer. A crisis of conscience. Why her, not him: and of course he is a helpless man without her and madly in love.

But all is well in the bittersweet Kaurismaki universe. The diagnosis was wrong, she is saved  and so is the migrant. All ends well in a non-Lynchian good fairy tale from the last of the European humanists.

All immigration and extradition lawyers should watch this film and those representing in immigration and asylum cases should be conscious of the protection of those who are subject to international legal and regulatory regimes approaching absurdity.

Humanity and humanism are all important and often nonsense reports by state authorities should be treated with utmost scepticism.

I defy any lawyer to watch it and not be moved about the responsibility of the profession.

Karismaki, of course, supported Corbyn and Le Havre was a response not just to Finnish immigration policies but a form of dehumanisation he perceives even in Nordic countries. but, given a culture of a measure of social sanitisation, perhaps more so.

His The Other Side Of  Hope (2017) won many awards and is also about immigration and the casual and violent racist attitudes that lead to the casual acceptance of violence. He is in danger of becoming mainstream and acceptable but I think not. He says he is retired. I doubt it and I hope not.

12 thoughts on “David Langwallner: A Port In A Storm”