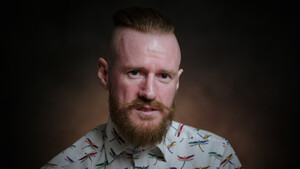 Staying in next Wednesday?

Stevo often refers to mental health issues in his stage shows and online sketches, sketches which have now racked millions of views online.

His Farmer Michael persona brings laughter to many of his young followers, but this persona masks an underlying anxiety from which Stevo has suffered all his life.

In this final documentary of Finné, Stevo explores his panic attacks, depression and alcohol abuse with candour, and also chronicles his drink driving escapade in 2005 which caused the death of his friend John Laffey, and left him paralysed from the waist down. 2 thoughts on “My Old Normal”