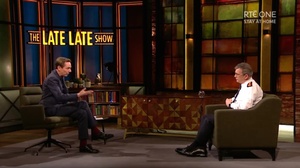 ‘I was burned out from exhaustion
Buried in the hail
Poisoned in the bushes
And blown out on the trail
Hunted like a crocodile
Ravaged in the corn
“Come in,” she said, “I’ll give ya
Shelter from the storm”‘

Bob Dylan: Shelter From the Storm

Frederico Garcia Lorca was, of course, murdered and abominated by fascists, but more of that later.

Drew Harris, our imported Garda Commissioner brought in to try and improve the Irish Police force, went on The Late Late Show and was given a far too soft ride by the terrible D4 lightness that is Ryan Turbidy, with an obviously pre-selected set of questions, focusing on the sideshow issue of prosecuting holiday makers or others who wish to flee Ireland in a fake visit to a Tenerife dentist. The sort of initiative the Irish might have historically approved of.

Now what they intend is of course the commission of a criminal offence, but to say what is proposed to be done is odious or deserving of condemnation and to focus on it in the present climate with the guest in question is a distraction and a decadence.

Fake outrage for the fake news generation. Fresh consumerist fruit for rotting desensitised vegetables, as The Dead Kennedys might argue. And a smokescreen and a deflection from the tough questions the Garda Commissioner ought to have been asked but was not by Turbridy.

It is an interesting insight into the decline in standards and a generational change that neither Gay Byrne nor Pat Kenny would have left him off the hook. More revealingly, later in the interview, Drew Harris indicated he did what he was told and that, in effect, he obeyed orders. This should have been probed but was not.

Of course ‘I was only following orders’ is the Eichmann excuse. The legendary public intellectual Hannah Arendt caused a proverbial shitstorm by her coverage of the Eichmann trial and her coining of the phrase the banality of evil applicable then and now in Eichman in Jerusalem (1961).

The book makes many significant points about how the obsession with compliance and promotion by officialdom blunts a moral sensibility and how a certain cognitive dissonance takes sway where the individual in question does not fully comprehend, through obedience, compliance and a gradually corroded sensibility or lack of same, what he or she is doing or the moral implications of same.

In her most comprehensive book, The Human Condition (1958), Arendt emphasises the moral conscience. It is not enough to do something you have to understand what you are doing and for whom and why. Or at least investigate,  or should that be interrogate, your motivations without being a perfectionist. That is if you are able to do so or allowed to do so.

In Eichmann in Jerusalem, Arendt also notes how Eichmann was more concerned with consorting with powerful people, networking without a moral comprehension of what they or he was doing.

So, perhaps Drew Harris should deal with the controlling interests in Harcourt Street or the Department of Justice where traditional methods of heavy gang brutality have been replaced by even more sophisticated forms of state framing.

Perhaps he should also reflect on the fact that he is supposed to head an independent investigative force but the police are not in fact an investigative force but a prosecution force, replete with cognitive and confirmatory bias, tunnel vision at best or with no moral compass at worst, and badly-trained, and with a ready cohort of prosecution lawyers to serve their interests. He might also reflect on who tells him what to do and which political and corporate class instruct him what to do and who to target.

There seemed at least the fledglings of a conscience and a form of reflectiveness and certainly a degree of nuance about prosecuting Tenerife holiday makers in our twisted universe.

In my role as cultural commissar to the Irish establishment I recommend Drew reads Les Miserables by Victor Hugo and how the vengeful prosecutor went after Jean Valgean for the theft of a loaf of bread. Perhaps he should also determine not to misapply scarce resources in prosecuting petty crime but going after white collar crime.

One hopes so, but he is also a passing shadow and, if not gone native, probably appreciates the art of the possible and not alienating those who pay the piper.

The gatekeepers, the custodians of the system, have to be above reproach or a crisis of legitimacy takes hold as in Germany historically or Serbia recently or recently in many countries with the advent of the virus.

It is noticeable in this context that East German border guards were retroactively convicted for shooting people as they sought to escape East Berlin over the Berlin Wall for, at that stage, doing their duty.

The German Constitutional Court and indeed the Eurpean Court of Human Rights utilised the great anti Nazi German jurist Radbruch’s formula that the perceived positive law must always yield to fundamental principles of humanitarian morality. Thus the law was not a law as it did not comply with fundamental moral principles which conform to humanitarian obligations.

The defence of only obeying orders – the defence Drew Harris seems to preemptively invoke – is not available. More to the point his words, as Arendt would say of Eichmann, show a cognitive dissonance and a lack of a moral conscience about what he is supposed to be doing.

Now, all police forces are hierarchical and in our present universe he must feel coercion and duress but he should avoid singing for his supper. Or at least all of the time. Simply say ‘No’ to quote the title of a 2012 Chilean film about an advertising consultant who engineered Pinochet’s downfall. In fact ‘Yes, boss’ is the Mafiosa defence or indeed the corporate compliance defence and it gets people into all sorts of trouble and moral compromises.

If you are to be a police commissioner for the people and not the elite just say no. Or say yes and no sometimes. At least be equivocal. Exercise judgment.

Moral priorities were also skewed, I might add, when I represented Ben Kimani in the death row in Nairobi. After three hours, a coffee break and a request on my behalf for a cigarette, I was taken on a walk down through security checkpoints from the 6th floor of government buildings half a mile up the road to the top floor of a building and a dusty annexe of a bar where I was told I could smoke.

President Kenyatta had in fact banned smoking in all public places in Kenya and, as I was informed by a senior government official, two American tourists had been arrested for lighting up in the previous few days. A crime against Kenyan law but not a crime of the magnitude of the crime Kenyan law has inflicted on Mr. KImani by keeping him on death row for many years.

Commissioner Harris now has all sorts of emergency powers invested in him and his force with more to come. His force does not deserve it.

Jonathan Sumption in the light of the Coronavirus epidemic, has sagely warned about the long-term restriction on liberty, by such powers, in The Times.

With police officers restricting movement and enforcing self-isolation, curbing the natural sociability of human beings, he pointedly decries an appalling vista. in the land of liberty and the Faerie Queene even. The gateway to a state of perpetual emergency. A state of permanent exceptionalism with ever more draconian legislation.

Well my advice in difficult times is simple, even to a police commissioner.

Be your own man Drew, just say no sometimes and do not do what political or corporate paymasters say to you. It will be to your benefit in the long run and your conscience will be clean or perhaps not as the universe is now so fractious and short term. Avoid the disproportionate implementation of draconian powers when you have the discretion to act prudentially.

His task is unenviable but he certainly should not focus on prosecuting the little people or rather they should be prosecuted responsibly and the force of his attention dedicated to his own rot. The rotten apples of Ireland and those who tell him what to do.

Remember as matters deteriorate further In a never-ending crisis and spiral it may be all the salvation that people have left. That is to go to Tenerife. A few weeks in Spain. a little shelter from the perfect storm to transpose Mr Dylan. A little respite from income collapse, homelessness, dehumanisation and early death.

And those reading this should listen to one of the last great humanist artists, Leonard Cohen’s acceptance speech before the royalty of Spain in accepting the Princess of Asturias prize.

Mr Harris should understand what facism did to Lorca and the importance, even for a police officer, of those that represent dissidence and the flamenco guitar player

Are you listening Mr. Harris. do you hear the guitar players or just the bean counters?

David Langwallner: A Port In A Storm

17 thoughts on “David Langwallner: Shelter From The Storm”