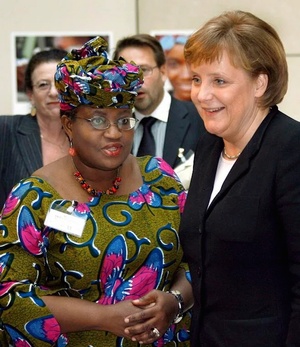 From top: Ngozi Okonjo-Iweala, then Nigeria’s Foreign and Finance Minister, at a meeting with German Chancellor Angela Merkel in 2007; Dan Boyle

This week has seen the appointment of the first African and first woman to be appointed as Director General of the World Trade Organisation, Ngozi Okonjo-Iweala.

Her appointment had been held up because of opposition from the Trump administration. With election of Joe Biden as US President, this objection has been dropped.

The presidents of the European Commission and the European Central Bank, along with the recently US Treasury Secretary, form a potent collection of influencers who will influence how the global economy is likely to develop, or not, in the years to come.

The growing political influence of women should of course be welcomed. Despite these significant appointments the political power of women remains tokenistic in many parts of the World.

In Ireland we remain particularly backward in promoting women into positions of power.

A direct promotion of women into prominent political roles does not guarantee better ways of making decisions and better decisions themselves, but it should make such change more likely.

Among the many reasons why the political glass ceiling has been largely unbroken has been because the routes that had been mainly available to women have either been those of inheritance, or in seeking to replicate the toxic behaviour of men in succeeding in the male world of politics.

Margaret Thatcher would be a good example of the latter. More ballsier than any man however inept they were.

Nor should any female politicians be not considered as being as incompetent as any man. The second UK Tory Prime Minister, Theresa May, is a prime example of that.

The most successful female politician of our era, Angela Merkel, is set to be replaced as leader of her political party by a man. It is certain that he won’t be anything like as successful.

What more women in decision making role would do is bring about a better sensibility. Women tend to be more patient, tend to be more likely to take a longer term view, see a bigger picture.

We don’t lack for real World examples of this. We have the very impressive Prime Minister of Aotearoa, Jacinda Ardern. There is the five party coalition government formed in Finland, with all female leaders. Finland where innovative policy approaches, on education and on eliminating homelessness, exist. And they haven’t been doing too badly on COVID either.

Not only are more women needed to change the how of politics but also the where. Away from musty chambers into the communities where real lives are lived. And also the when, making decisions in a more child friendly/family friendly way.

I realise I’m taking myself out of a job here.