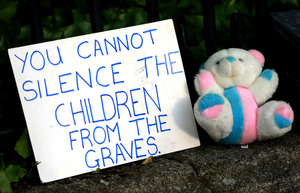 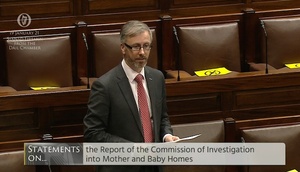 Minister for Children Roderic O’Gorman has said he is “not accepting” the statement by the Commission of Investigation into Mother and Baby Home that they do not believe deleted audio testimonies from survivors are retrievable.

…the recordings were made when former residents were invited to tell their personal stories to the inquiry. Its final report said people were informed before they gave evidence that the recordings would be destroyed. But some witnesses dispute that and the Data Protection Commissioner has questioned the legal basis for the deletion.

“It responded to me on Tuesday saying they believe the audio files weren’t retrievable. I’m not accepting it. We all know how difficult it is to permanently destroy electronic information.

“So I’m going to be continuing to engage with the commission on that to see if there is any technical solution available to the retrieval of those files.”

.@SocDems are bringing a motion to the floor of the Dail next week to extend the #MotherandBabyHomes Commission for 1 year. Survivors needs answers as to why their files were destroyed & they need time to do that. pic.twitter.com/sPqVFNnV8v

Social Democrats TD Jennifer Whitmore will next week introduce a Dáil motion to extend the timeframe of the Mother and Baby Homes Commission by one year. The commission is scheduled to be dissolved on February 28.

“We in the Social Democrats have a real concern that there is no legal basis for what the Commission has done here. We have written to the Office of the Data Protection Commission seeking an investigation into the circumstances surrounding this and the legality of such destruction under Article 6 and 9 of the GDPR legislation.

“Pending all the questioning and potential investigations into this act, we are calling for an extension to the Mother and Baby Homes Commission. There are concerns that if it does wind down, investigations cannot be fully carried out and questions will remain unanswered as a result.

“Our Dáil motion is a call to buy more time for survivors in their search for truth and justice.”