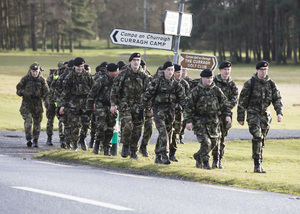 From top: Soldiers of the Irish Army section of the Defence Forces on a training excerise on the Curragh Plains, County Kildare; Derek Mooney

A few months after I started working as the special adviser in the Department of Defence, Gerry Hickey, the late and much missed programme manager to Taoiseach Bertie Ahern, phoned me to check on some departmental facts and figures for the annual Programme for Government review.

“…and roughly how many civil servants work in the Department of Defence”, he enquired.

“From what I can tell… about half of them”, I acerbically responded.

There was an exasperated silence at the other end of the line.  Not for the first time my knack for being smart-assed at the wrong moment was backfiring.

Luckily, I had the number to hand as there had been a parliamentary question on that topic a week or two before. From memory there were about 380 individual civil servants, but as some were on job sharing schemes this was roughly equal to 360 whole-time equivalents.

My wise-guy answer was unnecessarily facetious. Almost all of the department officials I encountered during in my time in defence were hard-working and professional. This is across the department, not just those on the policy side, who I encountered most frequently, but also the junior and mid-ranking officials who made the defence establishment work efficiently, such as those in the pay and pensions branches.

Back in 2005, the Department of Defence and the Defence Forces/Óglaigh na hÉireann were poster boys for public sector reform. The reforms made under the 2000 White Paper on Defence resulted in the military and the department becoming more efficient, better equipped and with higher productivity than when they had greater numbers.

Defence was the only sector across the entire public service to see a cut in numbers in the first decade of this century. While public service staff numbers increased by 17% between 2001 and 2009 – defence was the exception. Its numbers fell by 8%. It showed how public sector reform could work and that you could do more with better structures and systems (See Table 2.1 Pg 12 of Bórd Snip Nua Report Vol I).

The payroll savings made from reducing the Defence Force size to 10,500 and closing smaller barracks were invested back into better training and equipment.

Not that we achieved some defence nirvana. There were still major issues with barracks accommodation, equipment and renovation works. Though the Cabinet had politically decided that monies saved would be ploughed back into defence, that news never quite seemed to penetrate the inner recesses of the Department of Finance.

Its officials fought each investment project tooth and nail with ministerial interventions from the Ministers for Defence and Finance being frequently required to ensure that decisions already made at cabinet were acted upon. This highlights one of the great peculiarities of the Irish system of government: the money does not automatically follow the government decision – ministerial muscle and political clout is still required long after the cabinet memo has been signed off.

I think this latter point is critical to understanding the unseemly and alarming deterioration in the relationships between the Defence Forces and Department of Defence which has been expertly reported by both The Irish Times and The Irish Examiner.

These two newspapers have shown a keen and clearly informed interest in defense issues over the past few years and both would appear to have impeccable sources in both critical parts of the Irish defence establishment.

While there are bound to be what we might euphemistically call “creative tensions” at the senior levels of any organization, the breakdown in relationships as reported are not just serious, they are calamitous.

Though it may be tempting to view the problem are merely the out-workings of some personality clashes between senior figures within the Department and the Defence Forces/ Óglaigh na hÉireann, I strongly believe this is a misreading of the situation.

This is not about personalities, but rather the structural relations between the two leaderships and the perception that the Department of Defence is not championing and arguing the cause of the Defence Forces within government, most particularly the Department of Finance.

I think there is some basis to this concern – actually, it is hard to argue that there isn’t when, as Conor Gallagher reminded us in an excellent analysis piece in Saturday’s Irish Times, the Department has…

“…handed significant sums of money to the Exchequer every year – €130 million since 2013 – having failed to spend it.”

The Department’s innate inclination to avoid kicking sleeping dogs and at times to act like a supplicant, particularly when it comes to dealing with departments like Finance or Foreign Affairs, seems to have come to the surface, especially in the absence of any political clout at the head of the department.

Not to overwork the canine metaphor here, the absence of any serious political direction or influence within the department is the dog that hasn’t barked in the discussion of the deterioration of relationships.

For over a decade the Department has endured a sequence of what were effectively part-time ministers. Since 2011 it has had, in sequence:

Defence has had a decade of playing second fiddle to its own political master, having a succession of ministers whose primary political concern was their other, larger, and more newsworthy, department, be it Justice, Agriculture or even Taoiseach’s.

Perhaps the department has been too willing to allow itself to be sidelined by its own minister and perhaps placated as its departmental resources are secured while those of the Defence Forces/ Óglaigh na hÉireann lose ground, but it is extremely difficult for a department to successfully make a case for scarce resources when its own minister is effectively arguing against it by making a stronger case for their other department.

Not that there isn’t some blame on the other side too. While there is genuine sympathy with the uniformed side in this saga, we should not lose sight of the critical importance, in any democracy, of the supremacy of civilian authority over those in uniform.

It is an important principle, though not one that would be diminished or reduced by making the Chief of Staff of the Defence Forces, the accounting office for the military budget.

So, having an engaged and active the Minister is pivotal to having an effective Chief of Staff – but how can any Chief of Staff be held responsible for military efficiency and economy without possessing some responsibility for the day-to-day management of military expenditure?

Assigning this responsibility to the Chief of Staff would effectively mean taking it from the head of the department, the Secretary General. While I am sure senior officials will view this suggestion as hailing the end of civilization as they know it, the world did not end in July 2006 when the Garda Commissioner was appointed as the Accounting Officer for the Garda Budget.

I do see that the two situations are not analogous. The Garda budget, unlike the Defence Forces/Óglaigh na hÉireann budget, is only a portion of the overall Justice budget, even so there is scope within the Defence Acts 1954 to 2015 for some reassignment of responsibly while still retaining departmental oversight.

Just as the breakdown in relationship has its origins in a decade of political neglect and indifference, its remedy requires targeted and vigorous political action by the Taoiseach, Tánaiste, and Defence Minister. That is a tall order as two out of these three permitted the problem to arise.

Nonetheless, that’s the hand that defence has been dealt. One thing we know for sure is that this problem is not going to just sort itself. How could it when that’s precisely how it developed.

4 thoughts on “Derek Mooney: No Defence Of The Relationships”