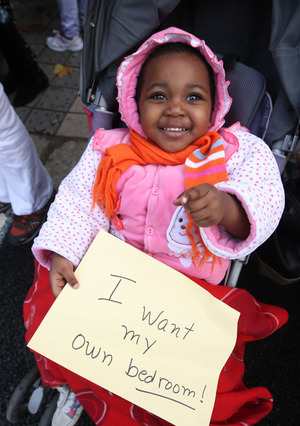 Hannah Komdwe, then aged 2, outside Leinster House was among asylum seekers calling for an end to Direct Provision in 2014

A white paper published earlier by the Government outlines plans to replace the Direct Provision system with an ‘international protection system’ and close all existing Direct Provision centres by the end of 2024.

Phase one is expected to take four months. In this phase, accommodation will be provided in reception and integration centres, which will be in State ownership and operated by not-for-profit organisations.

….applicants will be offered accommodation through a number of strands in phase two.

The plan says after their first four months in Ireland, people whose protection claims are still being processed will move to accommodation in the community.

It says this will be own-door or own-room accommodation, for which they will pay a means-tested rent.

…Single people will be housed in either own-door or own-room accommodation.

…Applicants will be entitled to seek paid work after six months….They will be able to apply to open a bank account and will be provided with information on how to do this. They will also be able to apply for Irish drivers’ licences at this stage.

PRESS STATEMENT: on White Paper to #EndDirectProvision. Concerned by congregated settings for single people; news plans not to be codified in law; date set Dec 2024 with no detailed plan on people currently in DP, calls on @OireachtasNews to legislate for new system pic.twitter.com/FtXdvviOtv