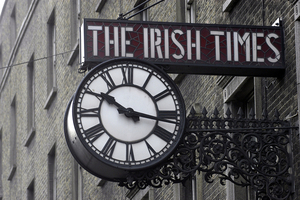 “Quote Mining: a situation in which a passage is removed from its surrounding matter in such a way as to distort its intended meaning.” Wikipedia

In Britain the BBC was considered by many to be the one grounded reliable source of news. Other sources had obvious agendas, but it was said that the BBC was the greatest example of the ideal of journalistic objectivity, reporting the facts in as unbiased a manner as is humanly possible. That was the story anyway.

During the World Cup in Russia BBC’s opening sequence to each match episode climaxed on an animated camera plunging into the Moscow metro and coming to rest on a man on a bench who looked remarkably like Jeremy Corbyn, the then Labour leader. The subliminal implications were clear. Corbyn spends his leisure time hanging out underground in Moscow.

The Irish media landscape is like a small brother of the British one. Many people turn to British news sources for a more detailed look at the news of the day, whether Beeb or Murdoch, because even these are more like reliable news sources than the watered-down news you often get in Ireland, ever careful not to offend.

It was said for a long time that the apparent gag placed on Irish journalists, preventing them from asking difficult questions, was due to unusually stringent libel laws.

But the suspicion was always there for some, that Irish journalists in the main were more public relations professionals, pragmatically concerned for the most part with protecting their own careers in the small and incestuous Irish professional world of business, politics and media where seemingly everyone is on first name terms, if not actually inter-married.

Irish politicians naturally got used to this kid glove journalism and even now they are forever complaining about the so-called barbarians of social media holding them to account on poor performance on such issues as homelessness, the pandemic, mad rents, historical abuse inquiries, tragedies of privatisation and so on.

But even in this relatively polite media landscape, there was one news source that was sometimes regarded in much the same way as the BBC was regarded in Britain, and this was the Irish Times, the so-called paper of record; a news source that proudly promoted the ideals of objective journalism unsullied by political bias or cronyism.

But like the BBC, the Irish Times seems now to represent not so much the objective truth as such, as it represents a narrative that suits a certain clientele. Where the BBC seems Tory at root, the Irish Times seems Fine Gael at root: the paper not of record, but of the property owners, the landlords; the business, political and professional classes.

But news sources are politically biased, and always have been. It would be naïve to think that the Irish Times or the BBC are totally objective. The best you can hope for is that an ideal exists within the heart of a news organisation to aspire to objectivity and journalistic ideals.

In the most recent Village magazine there is an article about a story run by the Irish Times in December 2020 when Pat Leahy, an Irish Times journalist, wrote that inequality was falling in Ireland.

This article’s claim was cited a week later in the Seanad by Senator Buttimer of FG as a “fact”. This “fact” was supported in Leahy’s article by a direct quote from a 2020 report by TASC, the think tank for action on social change.

But the quote chosen by Pat Leahy was only a partial quote, according to Village, giving the impression that the TASC report had found that inequality in Ireland was falling, when the report suggested that inequality was actually rising.

Brendan Ogle of Unite the Union wrote an article in response, pointing out this anomaly, but Village reports that the Irish Times refused to print his piece dismissing the article as being “too long”. Irish Times editors are apparently only in the business now of shortening long quotes, not long stories.

The reversal of meaning achieved by Pat Leahy in his article is unlikely to have been an editorial accident. And since this reversal of meaning was achieved by the omission of the rest of the quote, as shown by Village, the resulting “fact”, which was then eagerly picked up and disseminated by a Fine Gael senator, makes the entire exercise seem like an odd departure from the ethos of journalistic objectivity that the Irish Times is said to represent.

Out Of Time (Village)