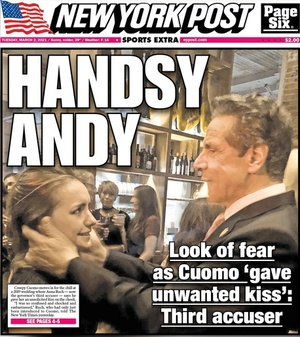 After a third woman came forward to accuse his brother, New York governor Andrew Cuomo, of inappropriate sexual behavior, CNN anchor Chris Cuomo the host of “Cuomo Prime Time” and known as Fredo after the doomed brother in The Godfather, told his viewers:

“Obviously I am aware of what’s going on with my brother, and obviously I cannot cover it, because he is my brother.”

“Now, of course CNN has to cover it. They have covered it extensively and they will continue to do so.”

“I have always cared very deeply about these issues and profoundly so. There’s a lot of news going on that matters also, so let’s get after that.”

What allegations does Andrew Cuomo face and could they bring him down? (The Guardian)

…New York Gov. Andrew Cuomo’s administration hired a defense attorney to represent the governor and his closest aides in an investigation probing COVID-19 nursing home deaths during the pandemic.

Defense attorney Elkan Abramowitz, a former federal prosecutor, confirmed to The Hill on Monday that he was representing the “Executive Chamber” as the state endures three probes into how it handled reporting coronavirus deaths in nursing homes.