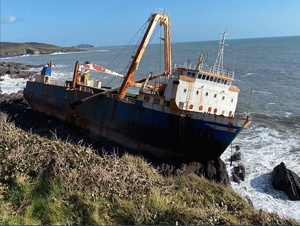 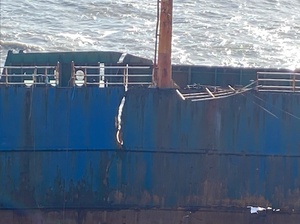 One year on #MVAlta – storm damage has taken its toll as a question mark still hangs over her future – large fractures mid-ship and huge sections port side have been tore away. More @rtenews pic.twitter.com/gzTKeo5Ram

The MV Alta, shipwrecked off the Cork coast 12 months ago…

…the Receiver of Wreck has confirmed that the period of time to claim the vessel – one year and a day – has expired.

Despite contact being made by an individual claiming to act on behalf of the owner in the days that followed her grounding, no valid claim of ownership has been received.

The Receiver of Wreck is consulting with the National Museum, which has 30 days to decide whether or not the wreck has any value – historic, archaeological or artistic.

It the National Museum decides the vessel or any part of her has no worth, the State becomes entitled to the unclaimed wreck.

What happens next to the MV Alta will then be a matter for Minister for Transport Eamon Ryan.

6 thoughts on “The Crack-Up”