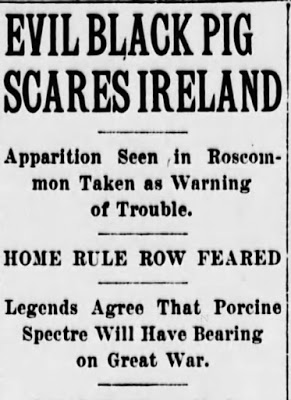 ‘The story has created an extraordinary sensation all over north and south Roscommon. Old people who had studied the prophecies of St. Columcille say that the “Black Pig” is referred to there as an evil omen for Ireland and that she is to travel through a certain part of the country west of the River Shannon before being killed or banished.

Others say that the appearance of the pig is the forerunner of a rising in the north to fight against home rule. These wiseacres say that while the omen portends evil in Ireland the application will be confined to Ulster…

Is This The Ghost Of A 19th Century Galway Nun?