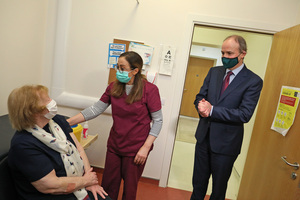 From top: Taoiseach, Micheál Martin at the Meath Primary Care Centre in Dublin last week as patients over 85 received their vaccinations; Derek Mooney

It has long been accepted that the primary responsibility of government is the safety and protection of its people.

Though we can be critical of this government for many things, accusing it of not taking this responsibility seriously is not one of them.

True, their execution of this responsibility has been patchy and erratic. The gradual depletion of our defence forces and the wanton neglect of national cybersecurity are but two obvious examples of how governments over the past decade have fallen well short of their duty to protect us, but – for the most part – the State has shown the political willingness and institutional capacity to keep us safe and well.

Right now, this solemn duty to protect underpins the vaccination programme. And, once again, while the government has the right intention, its execution falls short. Well short.

This is a curious failure from a government nominally headed up by a Taoiseach whose political watchword is to under-promise and over-deliver.

As I have said before in this column, Micheál Martin believes deeply in managing expectations. Under-promise and over-deliver has been his political modus operandi for most of his career. His approach is the polar opposite of that of the former New York governor, Mario Cuomo, whose famous maxim was: campaign in poetry, govern in prose.

Martin has long eschewed the poetry part. He prefers to campaign in prose and then govern, when he gets the chance, in a dirge-like prose…

While I am on the Cuomo side (the daddy Mario, not the handsy Andrew) and favour campaigning in poetry, you must still ensure your campaign poetry does not soar so high as to lose touch with the grounded reality you hope to govern.

The under-promise and over-deliver stratagem only works as a campaigning tactic when it pursued by folks who plan, when elected, to increase delivery to a level well above that which would have happened without their intervention. It tends to be used more by governments seeking re-election, rather than oppositions seeking to replace them.

When they do, then all too often it is deployed by insipid, uninspired, or even cynical politicians planning to do as little as possible when elected and then taking credit for everything that would have happened whether they were elected or not.

Under-promising and over-delivering is more a conventional governing strategy than a campaigning one. We see this across the Irish Sea where the post Dominic Cummings crew around Boris Johnson, especially Downing Street’s new press officer, Allegra Stratton, is deploying the under-promise and over-deliver approach with some success.

The polls have seen Boris Johnson pull ahead of Labour in recent weeks and months, thanks to a vaccination rollout that has exceeded everyone’s expectations – even Johnson’s fiercest critics. This is a lesson that Micheál Martin, Stephen Donnelly and others in government need to learn fast.

We saw one of the major downsides of Martin’s iteration of the under-promise approach with An Taoiseach describing the latest failure to reach a modest delivery target as a “bump in the road”. Missing the target by almost 20% is no mere bump.

Almost all vaccination delivery targets are being missed. This is not to say that the programme is failing. It isn’t. It has undoubtedly improved enormously since February. Nonetheless it is hard not to conclude that we now have a programme of under-promising and under-delivering that is sapping all public hope and confidence.

The stock answer that our failure to reach targets is due to problems with EU the supply pipeline is hard to sustain when you look at the number of other EU countries who use that same pipeline, but who are fare ahead of us, particularly Denmark.

At a time when we were still storing and hoarding supplies of Pfizer in fridges Denmark was putting them into arms and then going to Brussels and demanding extra supply. It went out, as it was perfectly entitled to do, and sourced extra supplies for itself.

Our lethargy on this is amazing. Perhaps there is a fear in government that looking to source Sputnik V or unused AstraZeneca in France and Germany risks being seen as over-promising and under-delivering. Who knows… but it is hard to fathom why ministers have been so unenthusiastic about pursuing these options?

What I do know is that the current approach is not working and should not be maintained. While our situation is not hopeless, the various institutions of the state from Cabinet to NPHET to HSE have succeeded in expunging almost all hope from the national discourse.

However, in that horrible phrase: we are where we are and where we are right now is at least two months behind Northern Ireland and the UK and several weeks behind many other countries in Europe.

Though we are in the top third of the table of 27 EU countries in terms of vaccine rollout, our problem is that we lead the EU table when it comes to workplace closures.

We have endured the longest lockdown, closing all but essential workplaces for 163 days from the start of the pandemic to the middle of January (See Reuters Graphics report). The comparable figure for Germany was 34, for France it was 84 and for Italy it was 134.

The Irish figure now stands at almost 200 days. So, coming 7th or 8th in Europe when it comes to vaccine rollout simply is not good enough. We need to be at the top of the vaccine rollout league. That means we need to have a greater percentage of our people vaccinated, even if only with one dose, by the end of April or May.

For that reason, I strongly believe we should be considering adopting the UK strategy here and deferring the delivery of 2nd doses for eight to twelve weeks. This would allow us to vaccinate more people, more quickly and then unlock the country after what will easily be the longest continuous lockdown in Europe.

There is sound medical evidence for taking this approach. The University of Minnesota’s Center for Infectious Disease Research and Policy has produced a very detailed scientific report advocating the deferral of second doses where vaccine supply is faltering and the threat posed by new variants is increasing.

It considered the risks associated with deferring the administration of the second vaccine dose beyond that recommended by manufacturers and concluded that:

…evidence from other vaccines suggests that an extended time between vaccine doses does not generally compromise – and indeed may increase – the antibody response to a vaccine boost.

It further found that:

“High levels of protection, however, were measured even after the first dose, with a vaccine efficacy over 92% for both vaccines [Pfizer + AstraZeneca] beginning at 14 days post–dose one. Even among older adults, vaccine efficacy remained high following both dose one and dose two…”

Various studies show that the level of immunity offered by a single dose is extremely high and that the first dose also dramatically reduces your chances of spreading the virus.

So, if we expect to get 1 million doses of vaccine per month in April, May and June allowing us to vaccinate 1.5 million people with two doses, would we not be better in vaccinating 3 million people with one dose and then proceed to give them their second doses from the ever-increasing levels of supply due in July, August and September? We might even have sufficient supplies of the J&J one dose vaccine by then to complete the programme sooner.

This strategy would allow us to unlock earlier, making the mid-summer deadline look like an under promise that was over delivered. This is not an untried theorem – it is happening on our doorstep, in Northern Ireland, Scotland, Wales and England and we can see it is working.

I hope someone, somewhere in government is looking seriously at this option and that they have been looking at it for some time, as we will need a decision on this over the next two weeks, so that everyone vaccinated from the March 31st onwards can be given one dose and told not to expect to get their second dose until sometime from the end of June.

We’ve had enough under-promising. It’s time to focus on some serious over delivery – and fast.