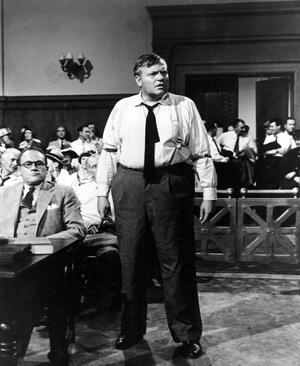 Orson Welles arrived in Ireland as a 15-year-old farm boy, but precocious and overweight beyond his years. After a tour of the West Coast – a kind of obligatory rite of passage – he was penniless and, clutching fake representations and reviews, he presented himself before Mr. Micheál Mac Liammóir at The Gate Theatre, Dublin and said:

“I am a prominent Broadway actor.”

Now the great old whore and ham (Mac Liammóir) did not believe a word of it but gave him a job. Old Ireland. He was impressive. An impressive confidence trickster.

Mr. Welles acquitted himself brilliantly and used all of that and the glorious reviews of The Gate to springboard himself back into America.

The point of odd coincidence in my life is that the avuncular, cigar-chomping, rotund, bon viveur a far too kind expression out of loyalty, frequented The Gate even when MacLiammoir was dead, demonstrating one of his many great qualities. Loyalty to old friends. Nostalgia an emotion to be avoided.

So Mr. Welles went back to The Gate often and I met him once. It was an extraordinary experience to be in the presence of that level of lifestyle excess, utter egotism and diet and, let’s face it, genius. Forty five minutes of unbridled conversation with several bottles of claret downed. This was the 1980s and he died soon after from a heart attack at 67. Look at the achievements though admonish the self destruction non puritanically.

The greatest American trial lawyer of the century in terms of notoriety was Clarence Darrow. There are other American candidates. Gerry Spence is still alive though 90 with an unimpeachable 100 percent acquittal rate in criminal cases. The reputation of others are more like skyrocket, brief flashes that burn and or brought down by their imperfections.

Clarence Darrow avoids these pitfalls for a variety of reasons. He was part of the movement known as Progressivism splendidly documented in the book The Metaphysical Club (2001) by Menand.

This was a belief now somewhat quaint in scientific progress, pragmatism the notion that society should develop in progressive terms. It was also a faith in the Enlightenment and the power of reason and thus there was a divergence between the force of light and the forces of darkness, epitomised by religious fundamentalism, as important and dangerous then as now.

Darrow, unlike other trial lawyers, stood for certain things. He was in many ways a man of ideas and an intellectual and moral framework defined him and what he did and he was consistent.

Thus he did not judge his clients or shy away from controversy whoever they were and however damned in the eyes of the public they were. He was not a believer in free will but argued that societal considerations, environment and hereditary shaped a person’s destiny whatever their background.

Darrow, thus represented the preppy college boys of privilege in the Leopold and Loeb case, immortalised by the performance of Welles as Darrow in the film Compulsion (1958) a disturbing insight then and now into the American mindset or indeed any society based on the assumption of privilege.

Now the murder was heinous of a young boy and there was no possibility of an acquittal except on the grounds of diminished responsibility. Leopald and Loeb had colluded  in the murder of an eight-year-old boy due to a Dostoevskian ubermensch sense of themselves as supermen. That corporate sociopathy warped into the American and indeed Irish character and in elements also of the ruling class of all countries. Born to rule. Noblesse oblige. We the powerful from the good families are unaccountable and above the law. Particularly in our dark age.

The death penalty was at stake thus and that then and now adds to the drama of American trials. Darrow’s strategy was to plead guilty but seek to admit psychiatric reports which would be consistent with huge terms of incarceration rather than the finality of death

He succeeded brilliantly, though the judge did not in point of fact accept the psychiatric evidence ultimately he did admit it and it sub silento influenced the life imprisonment sentence.

The Prosecutor also to some extent put Darrow on trial. In fact for his late career he was always on trial. It was always a case of trying the man and his ideas as well as his client. The Prosecutor argued that Darrow believed that people were not in jail because they deserve to be but due to circumstances beyond their control.

Darrow in fact compiled or obliged this prejudice in his closing speech when He stressed the lack of responsibility of his clients.

They did it for the experience without reason and needed kindness and charity not outright condemnation. The sort of sentiments that might incur an outright knee jerk reaction in this day and age of right wing triumphalism and fascism

It was a noticeable feature of his representations that he seemed to find the good in anybody and had an extended sense of compassion to his clients not entirely evident in his personal life.
I think this is true of most defence lawyers that the surfeit of empathy required to do the job does not often translate into a comfortable private existence.

His graphic and lifelong hatred of the death penalty is also evident in the closing peroration:

“You can trace it all down through the history of man. You can trace the burnings, the boiling, the drawings and the quartering, the hanging of people at the crossroads, carving them up and hanging them as examples for all to see.”

In this he was influenced by a story his father told him when young of witnessing a public execution and his closing line was incredible, blending his hatred of the death penalty with his hatred of religion seamlessly.

The Leopold and Loeb Case not only gave rise to Welles as Darrow in Compulsion but also indirectly to Alfred Hitchcock’s Rope (1948), where the murder is of a more vulnerable adult and it obviously touched a raw nerve in the American character. In effect it is the phenomenon of the younger cuckooing the older person, the more vulnerable adult.

But there are more significant observations relevant to our time. It is about the imposition of power by the over entitled in our neo liberal universe and the assumption of superiority based on, what exactly? Thus it is about, in criminal lawyer terms, coercive and abusive relationships based on power and the inequality of bargaining.

It is also about the psychosis of the preciously well-educated and who they take advantage of and, in our distorted universe, that means there is little distinction between monolithic capitalist models and criminal cartels.

The same thing. A crucial realisation. The organisation of work. The business of business.

6 thoughts on “David Langwallner: Give Them Enough Rope”