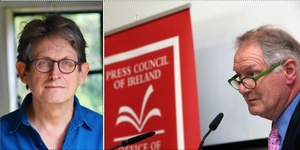 Alan Rusbridger (top left), the former editor of the Guardian, has stepped down from the government’s Future of  Media commission following controversy over his employment of Roy Greenslade (right), who recently revealed that he had supported the IRA’s use of violence during the Troubles and had concealed that fact to protect his employment.

Rusbridger said he had been heartened by support from his fellow commissioners and the culture and media minister, Catherine Martin, who last week backed his continued involvement.

One article by Greenslade in 2014 was critical of Máiría Cahill and a BBC documentary that aired her claim about being raped by a former IRA member.

The Guardian apologised to Cahill last week saying, as did Rusbridger, who said Greenslade should have been explicit about his support for the IRA. After the Guardian’s readers’ editor completed a review of this and two other Greenslade articles regarding Cahill’s case all three articles were removed from its website.