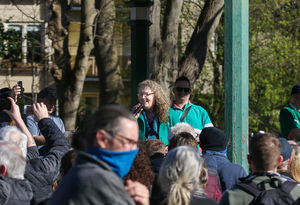 UCD School of Medicine’s Professor Dolores Cahill addressing the crowd at at an anti-lockdown gathering in Herbert Park, Dublin 4 on St. Patrick’s Day

Professor Cahill told an anti-lockdown event on St Patrick’s Day that the wearing of masks was starving children of oxygen.

Conor Anderson, President of UCD Students’ Union said Prof Cahill, who chairs the far-right Irish Freedom Party, has propagated a number of “medically-inaccurate conspiracy theories in service of a far-right political agenda throughout the Covid-19 pandemic”. He said she is not an expert in virology, epidemiology, or public health.

Mr Anderson said he has written to the head of the UCD School of Medicine and the head of UCD Human Resources to request that Prof Cahill be investigated under Statute 28 of the Universities Act 1997 which defines gross misconduct, in part, as “deliberate disregard for health and safety precautions likely to endanger another person.”

The academic is no longer lecturing in UCD’s school of medicine. She had taught a first-year medicine class, called Science, Medicine and Society, usually held in the spring.

UCD confirmed Prof Cahill was no longer teaching the class, or any modules during the current academic term. “Prof Dolores Cahill is not scheduled to teach or co-ordinate modules this trimester,” said a spokeswoman.

The module, previously taught by Prof Cahill, had been taken over by Prof Patrick Murray, she said. However, she declined to say whether Prof Cahill’s move had been in response to her comments about Covid-19.