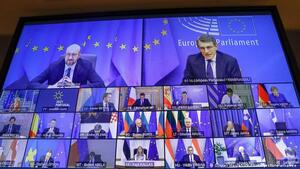 Debates have grown over ethical dilemmas surrounding the concept, including fears of discrimination in linking free movement to health benefits and privacy concerns. But the Commission claimed that it had considered such concerns.

We raised my serious concerns over Vaccine Passports today in the Dáil.

Also introducing a Vaccine Passport when people who want vaccines can’t get them is a kick in the teeth to people who suffered enough. pic.twitter.com/T3Oi7zKRxK

Meanwhile, in The UK…

NEW: @PimlicoPlumbers Charlie Mullins tells me there should be “no more pussyfooting about” from govt over vaccine passports.

“Personally I don’t think we should even allow people on to the streets unless the’ve had the vaccine.”

A couple is told to leave an airplane in Isreal because their child is not wearing a mask. All fellow passengers walk out in protest.