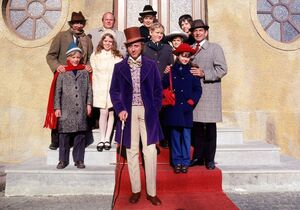 From top: Gene Wilder (centre) as Willy Wonka in Willy Wonka And The Chocolate Factory (1971). Charlie Bucket and his grandfather are on the left; David Langwallner

Roald Dahl created ambiguous books for children with dark metaphorical messages. The most famous are about Mr. Willie Wonka. Mr. Wonka owns a chocolate factory and closed it because of espionage and betrayal. Now, in seclusion, he creates the Wonka chocolate bars in a factory where a race of Oompah Loompas or dwarfs work for him. The little people. The excluded migrants of the world. The excluded soon to be all of the world. The dispossessed.

Mr. Wonka thus invites a competition as he is getting old and he needs someone to run the chocolate factory. Precious golden tickets are distributed worldwide. So, there is a test and the children invited – for he only trusts uncorrupted children as he is a child adult himself or a magician or sorcerer –  to run the business.  But children are also corrupted, and the children are all tested, and all fail. Fallen angels in a world of illusions. Charlie Bucket, the last recipient of the golden ticket, fails by cheating with the enlistment of his grandfather. But is redeemable.

Mr. Wonka is an odd person. Ken Dodd meets Jonathan Sumption. A fictional warlock perfectly portrayed by Gene Wilder, an American, capturing dotty land and decency, the past and metaphor. And remember it is the past. What was then a fairy tale morality play is now something perhaps unachievable. But let us try and fail again.

Bucket, Wonka accepts, Is the ideal man child to run the chocolate factory as he is a working-class child from a poor background, but his poverty, at one level, dictates an element of unintentional or rather forced dishonesty which he recants from and via his grandfather accuses the venerable but horrible beast Mr Wonka of hypocrisy and monstrous cruelty. For Mr Wonka is a genius but also an eccentric idealistic monster.

And so, shines a good deed in this dark world, Wonka incants when Charlie recants (but admonishes Wonka for his cruelty). A dark world. Thus, in a grim fairy tale, the destitute Charlie inherits the chocolate factory. in a world of grand illusions, La Grande illusion.

Now it is easy to venerate children but also easier to understand what they are like when they become adults. Through a glass darkly, an unsparing gaze.

Augustus Gloop is a bit like a merger of Michael McDowell and Helmut Kohl, disposed easily into the swamp of ridicule by gluttony and greedy stupidity. Mike TV has the attention span of a gnat and the consequent over confidence of a limited knowledge base, like a lot of our corporate entrepreneurs such as Smurfit.

Violet? Well she just likes the adulation and attention too much, a selfish nerdish queen like the Amy Coney Barretts of our universe. Fast talking, sassy and inconsequential, but destined to be powerful. And Verruca Salt? The name deliberates chosen emphasis on over confidence, self-entitlement and bears a curious resemblance to Varadkar, who is, in fact, much more sinister, a crypto fascist spoiled brat.

And so, to Charlie B. Childlike love is important, and he has a good support structure. His heart is in the right place and Mr Willie Wonka knows this. And the test is, oh so, cruel and devilishly inventive and rightly so.

But who is Mr Wonka to judge and what does the chocolate factory do? Well, it provides good chocolate and does not corrupt the innocent. Pleasure in moderate doses. It also employs the Oompa Lumpas evicted or deported from Lumpaland horribly targeted by the Vermicious Knids among others. The Charlie Buckets should be running the universe. But are not. In fact, the inappropriate adults are.

The recently departed Gunter Grass wrote many novels and was a vigorous political polemicist and a German national figure. He is most famous for his novel The Tin Drum (1955).

The premise is that Oscar, a severely mentally handicapped child, bangs a tin drum in Germany at the onset of fascism. He sees everything that is going on. It is the perspective of the outsider, the clown observant, the not to be taken seriously, the boy who cries wolf. His access to the inner sanctum of  society is precisely because he is not to be taken seriously. He cannot be a threat.

Like a lot of autistic people and those suffering from Asperger’s, of which I have had considerable professional experience, he is inclined to tell the truth or call it as he sees it. His mind is unfiltered by bourgeoise hypocrisy. Thus, he has common cause with human rights activists, fearless journalists, and defenders of free speech. When the definitions of madness as a social construct protect the mad and when the lunatics have taken over the asylum then the truth teller becomes the mad one.

What Oscar witnesses in The Tin Drum is the seeds of cruelty, barbarism, a lack of compassion and the demonisation of the other. This is what is happening now.

At a very fundamental level, neo liberalism has destroyed or warped human identity. We are only creatures of our development and upbringing and products caught in time and space of our environment. It is only exceptional people who cut the umbilical cord and escape the prejudices and predilections of their upbringing or at least must modify their prejudices. Few people have time to grow or are given the time. And children are now rewrapped or rewarped.

The neo-liberal mentality focuses exclusively on self and self-actualisation in an atomised Social Darwinist world where people are, in effect, products. The cult of self has led to the triumph of homo economicus and made the concept of community redundant.

This, of course, means that we do not define ourselves any longer in terms of associational ties or mutual obligations of reciprocity and give and take, but of self-defined take and exploit. It is the commodification of existence. And for children, manipulable, and dependent, it is worse.

Our educational systems are, in fact, producing ill formed, philosophically illiterate and, indeed, genuinely often illiterate children who are educated as corporate profit-enhancers. And semi education breeds the self-righteous nature of fascism. Why appeal to true argument when your thought processes stand unexamined and your prejudices unchallenged?

So, Mr Wonka needs the right child adult to run the chocolate factory, but how difficult is that going to be when neo liberalism, relativism, consumerism and semi literacy have done their work on our children.

How many Charlie Buckets are there? More likely the Verrucas/Varadkars will rule. The triumph of the unfit. Good old boys and girls.

And in any event Mr. Wonka does not exist and there are no clear leaders. It is a dark fairy tale.

David Langwallner: Give Them Enough Rope

David Langwallner: Why I Disagree

26 thoughts on “David Langwallner: I’ve Got A Perfect Puzzle For You”