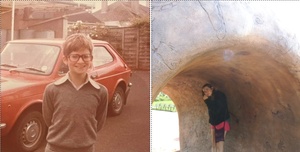 I am afraid I do not have anything for today, other than a little bit of news. I have been in quite a bit of a daze since I heard it. And, to be honest, quite a bit terrified.

Little Slightly has been calling a lot lately. She lives in the mid-west US, and has no idea about time difference. OK, not totally true – she does know, she just does not really care. Since she was a very wee one and wanted me to read her a story before bed, she just called. The stories are a little more grown up now, but she still calls when she wants to talk. And of course I answer.

And gulper! It appears that before the end of the year I just may be a grandfather.

So I have not been able to string a coherent thought since then. I am not sure when I will be able to.

So please, share this short bit of news instead of my column. Janet and Millie may soon have competition for the cutest babby, and I think I will need a stiff drink!

A much more than slightly bemused.

15 thoughts on “Dazed And Bemused”