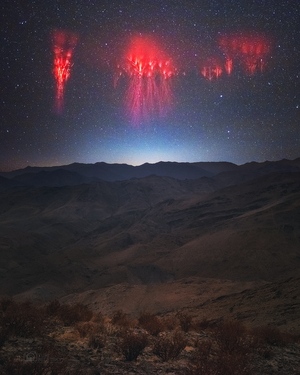 Behold: one of the most spectacular shots yet of red sprite lightning. To wit:

Recent research has shown that following a powerful positive cloud-to-ground lightning strike, red sprites may start as 100-meter balls of ionised air that shoot down from about 80-km high at 10 percent the speed of light. They are quickly followed by a group of upward streaking ionised balls. The featured image was taken earlier this year from Las Campanas observatory in Chile over the Andes Mountains in Argentina. Red sprites take only a fraction of a second to occur and are best seen when powerful thunderstorms are visible from the side.

Let’s look a little closer, shall we?

Previously: No Sprite Is Safe

The Pen Is Mightier Than The Sword

The Whole Of The Moon