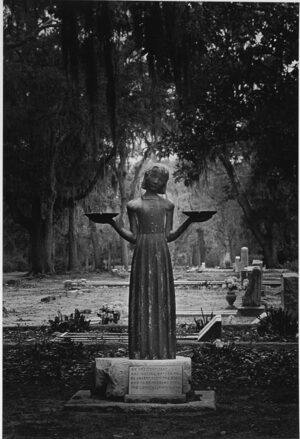 From top: the statue on the cover of Midnight in The Garden of Good and Evil originally located in Bonaventure Cemetery, Savannah, Georgia; David Langwallner

It is Easter time, and one is reminded of the resurrection of good and evil.

The Southern Gothic tradition of such diverse figures as Faulkner, Cormac McCarthy and, above all else, Flannery O’Connor is a potpourri of hysteria, a crucible of awfulness. The dominant themes are race, class divisions, murder and insanity all inter linked and relevant to our age of extremes.

A later Southern Gothic crime novel is John Berendt’s Midnight in the Garden of Good and Evil (1994), also turned into a film, about murder most foul, or was it?

I had given a paper at an Innocence Project conference in Atlanta in 2010 and then, following an act of god, the volcano erupted in Iceland, we were stranded.

Atlanta is a dangerous city, even walking from our 5-star bland hotel to Martin Luther King’s birthplace and museum, a short ten-minute walk from our hotel, was to see much urban degeneration. Thus, after said visit, we hopscotched across the state of Georgia to Savannah with flights delayed. The conference had concluded on the 14th of April after Easter, or what Americans call Spring Break which is a decidedly different ritual.

Savannah, Georgia is an utterly eerie place. It contains some of the oldest courtly buildings in America and some of the best bookshops, including one where, except for financial impediment, I would have picked up, for next to nothing, a first edition with dust wrapper of The Great Gatsby. Funds were drying up.

These early colonial buildings included the mansion of a man put on trial for murder. Jim Williams was a successful art and antiques dealer. A wonderful tour of his mansion, Mercer House, from a man who knew and liked him well and saw him die was most informative. Antique dealers or art dealers who I have represented historically are the most ambiguously loved and hated people. Like Marmite. He thus seemed a loveable scapegrace. But said people have enemies in a local and closed community where people talk. Like Ireland, a valley of the peeping windows.

The book on its cover has a stunning example of Southern Gothic sculpture (above). It is the centrepiece of a museum displaced from its utterly macabre setting in the Bonaventure cemetery.

Oliver St John Gogarty, the Irish writer, surgeon, and dissolute, was sued for libel in his famous book As I Was Going Down Sackville Street (1937) for making a remark of antique dealers from the Dublin Liberties that:

‘They were in fact more interested in new mistresses than old masters.’

A typical callous Irish comment but, in substance, right, and I have also represented the same. Samuel Beckett who gave evidence in the subsequent libel case arising from Gogarty’s book, and obviously despised by the judge, was gloriously entertaining about this when I met him in 1981.

Jim Williams was put on trial four times and eventually acquitted for murdering his boyfriend. The argument was self-defence and, in effect, proportionate force as, he claimed, that after a tiff he had been attacked with a gun and merely responded.

All juries were hung until the final one when the trial was moved out of Savannah. Many wanted to hang him; many were fond of him. Either way, the strain of it all killed him. Local communities and small towns are riveted by blood feuds and animosities built up over time. It is always best not to become too prominent with a hint of unconventional notoriety in a local community.

Williams had friends. He was a conservationist and restored many historic buildings, but he made a lot of money and lived opulently and in a manner, which may have caused puritan eyebrows to be raised.

The title refers to the witching hour near midnight where folk magic is replaced by evil magic and the film features voodoo incantations that Williams be acquitted. Of course, a thought that has occurred to me often is that advocacy is like voodoo and sorcery. It is certainly a nonlinear dark art. It is not an entirely rational exercise and over rational formalistic predentary in advocacy has huge dangers in being effective.

The trial of Williams, at one level, was a form of the criminalisation and demonisation of someone for a lifestyle, perceived by some, as transgressive. Savannah is a most odd place with much old wealth of puritan stock and Mr Williams, with his parvenu, unconventional lifestyle and love of voodoo and alchemy, was a target.

The film and the sculpture are most unsettling, like the town itself ,with its interrelationship between high and low. Voodoo probably helped him not be convicted on balance. The film is also unsettling about prosecutorial zeal. They wanted him convicted. They were gunning for him.

But Williams you see, from a certain mindset, was a sinner.

But such statist absurdity is a feature of our age. Prior to the Catalan trial, for the simple civic act of hosting a referendum, a minister in the Spanish government Donna Luzon referred to the soon-to-be tried as the convicted. The lowering of criminal processes to hybrid civil processes to guilt by accusation and preventive detention is an awful feature of our age. The targeting of Julian Assange, which I have recently commented on (also see below) , is an act of state vengeance masking over their own criminality. The age of state authoritarianism not Aquarius.

I could afford some cheap books – not The Great Gatsby – for the journey home. A very courtly old lady with impeccable pearls and a blue rinse – when I asked for directions to Jim William’s mansion – said with a barely concealed flash of anger and a crimson blush, ‘He had it coming to him. He was known to the town’.

The volcano has now erupted worldwide and with the lowering of proof processes and an age of internment compulsory or otherwise and debates about vaccinations and viruses to come, the targeting of whistle-blowers and human rights lawyers, and a state of permanent coronavirus panopticon, we are all in Midnight on the Garden of Good and Evil and god only knows what is coming to whom? Or who is coming for whom or for what reason?

The question thus is fundamentally raised worldwide at all sorts of levels at Easter time as to what innocence is and who is truly evil.

David Langwallner: Weiss Before The Event

4 thoughts on “David Langwallner: After Midnight”