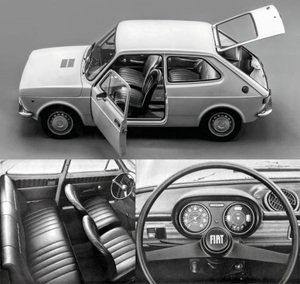 How do you fit ten kids in a Ford Cortina? Not a red one, burgundy. Bench seats front and back, and column gears. Allowed for a lot of sins in today’s age.

Growing up as one of the little ones, I remember being carried in my mothers arms as brothers and sisters fought for room on the back seat. In later years I got the vaunted window seat, rear left, as we towed the caravan around the country. I was light, the shock absorbers on that side were dodgy, but I got the window seat.

Of course we grew up, and quite literally outgrew the Cortina. So another car was needed, and our aunt gave us her Fiat 850. It was blue. So we called it the Bluebottle. We were very imaginative in those days. I remember once polishing it, and putting the lid of the bottle on the front bumper thinking it would go nowhere because it was metal. Yeah, well, that did not work,, so we just used all the polish instead, and said nothing, although in hindsight my mother’s grin said she knew.

That Bluebottle brought me to my First Communion. We had been brought to what I always called electrocution lessons (elocution, how to pronounce your thees and thous and to enunciate even unto the farthest walls). I remember being asked as the first of our group to give my prayer. When I finished, a microphone was proffered. I was still the only one heard at the door. Probably explains a lot about me.

Back to the Cortina,, and my mother. My father did service overseas with the Army as part of a UN mission. So he had to teach my mother to drive. We only had the Cortina at the time, so naturally that was what she learned in. We came home, and were met by a lovely man from across the road. His name was John. Although I have no specific memory of the occasion, apparently I told him that Daddy took us to a lovely smooth road and Mummy made it all bumpy.

Years later I was in the car with my mother, and we are going down a road I was not totally familiar with. So I asked, and in a tight voice I was informed this was the road Mummy made all bumpy. So time to shut up, and enjoy the scenery.

But eventually we outgrew the Cortina, and the Bluebottle pretty much died. So one day Dad wandered off with it and came back with the Fiat 127. He had wanted a 126, but they had none in stock. Apparently a TV ad made them most popular. It was his first brand new car.

We wandered all over in the country in that car, usually behind the caravan towed by my Dad. In Connemara one time the caravan suddenly did an impression of one of those cowboy bucking broncos, and ended up through one of those lovely scenic walls, and on its side. Two sensible driving habits happened that day: Dad kept going to avoid the van, and Mum backed right off, to avoid the van. In the end, while all the soft stuff was scattered, only one plate broke. I learned the difference between packed and stowed.

My eldest brother had his first car crash in that Fiat, as he avoided a tractor that decided both sides of the road were good. Later, whatever damage that did, my mother told my Dad that the car felt unsound. So he took it off the road, bought a later model 127, and decided that as this had been his first brand new car, no one else would own it.

So he cut it up with an angle grinder. Turned out it was riddled with rust, which was what my mother had felt. So, in the reverse of Johnny Cash’s song, it was one piece at a time into the bin. Took the whole summer. Not sure what he did with the engine.

I Am The Egg Man