The HSE has cancelled all AstraZeneca vaccination clinics for tomorrow, in light of the revised NIAC advice pic.twitter.com/29FQZ7pClm

A recommendation that the AstraZeneca Covid-19 vaccine be restricted for use here for people over 60 years of age is expected today from the National Immunisation Advisory Committee, RTE News has confirmed https://t.co/BxoQA1Jn8x 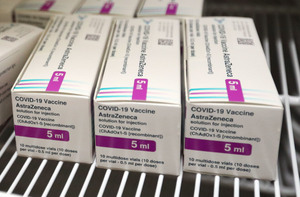 HSE’s target of administering initial vaccine doses to 80 per cent of the willing adult population by June is under question if the The National Immunisation Advisory Committee (NIAC) rules out the use of the AstraZeneca jab over blood clotting fears.

“Certainly, at the moment, if the vaccines come in as they are forecast to do, then by the end of June, four in every five adults who wants a vaccine will be in a position to be offered one. It really is a great cause for hope, particularly on a day like today, where we’re taking a cautious but important step out of the pandemic.”

When asked whether this goal will remain achievable if recommendations surrounding the AstraZeneca jab change, he responded:

‘All I’m saying is, there’s not much point in gauging “what if NIAC say this or this or this”.

‘We’ll have word from NIAC very shortly, and when we do, if the operations do need to be adjusted, we can adjust them.”

Up to 80 percent of people offered the AstraZeneca Covid-19 vaccine In Sicily refuse it out of fears over its safety, according to the southern Italian region’s president Nello Musumeci.

Public confidence in the Anglo-Swedish jab has been badly shaken by reports linking it to rare, but potentially fatal, blood clots, and by conflicting recommendations on its use.

“In Sicily, there is an 80-percent refusal rate of the AstraZeneca vaccine. Every 100 people, 80 say no,” Musumeci said late Saturday in Catania, according to multiple media reports.

‘Up to 80 percent’ in Sicily refuse AZ vaccine: president (France24)

At the height of the pandemic in Jan 2021, when more than 1,400 people died, Stephen Donnelly was upset that he was not being mentioned by name in tweets issued by the Dept of Health. Robert Watt tried to get to the bottom of this scandal. pic.twitter.com/K1jveM9JZa

Mary Wilson: “Minister, just finally, you’re on the front page of The Irish Times. ‘Donnelly queries exclusion from department analysis of tweets’. It said you looked for an analysis of tweets and retweets of you and your Twitter feed from the department, as compared to your constituency colleague, Simon Harris. You did this in January at a time when we had escalating Covid numbers. Why would you do that?”

Donnelly: “No, like I said Mary, it, I haven’t seen the article, it’s a piece of work that somebody did within the department. And it came up, presumably, in a FOI request, I’d have to take a look.”

Wilson: “Minister, Stephen Donnelly, thank you very much for joining us on Morning Ireland.”