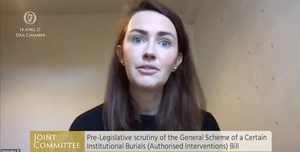 The Joint Oireachtas Committee on Children, Disability, Equality and Integration debate on the Institutional Burials Bill.

Social Democrats TD Holly Cairns noted that human rights lawyer Dr Maeve O’Rourke had set out in her opening statement that the Attorney General and Minister for Justice can direct the coroner to act and asked if she’d like that to happen.

“We absolutely have set out that the coroner has current obligations and that was the first question that I raised: what is the explanation for the absence of inquests to date?

“We need real answers to that. So that we know what we’re dealing with. What is it that the civil servants are saying as to why the coroner has been misapplied in this law. Is it that they don’t believe legally there’s any requirement? Or that they think it’s too expensive? But the coroner is currently obliged and we need to understand why it’s not happening.

“This legislation, I really believe, will disapply fully the coroner’s current jurisdiction. That’s the point of it. So until it comes into force, the coroner is obliged…but once an agency is established, under this law, in relation to a particular area, the coroner no longer has that legal obligation or power indeed.”

“Things I’d like to point out. One being that the question of how, in relation to an inquest, goes beyond, particularly in Article 2 of the European Convention [on Human Rights) – respecting inquests goes beyond the immediate cause of death to include contextual causes and circumstances as well. So there’s evidence that needs to be gained that doesn’t just come from the body.

“It’s also worth pointing out Section 22 of the Coroner’s Act 1962 which states that: “Where the body of any person upon which it is necessary to hold an inquest has been buried and it is known to the coroner that no good purpose will be effected by exhuming the body for the purposes of an inquest, he/she may proceed to hold an inquest without exhumation.”

“And Section 23 takes this further stating that, where a body may be irrecoverable – which I think is important because, of course, we have hundreds of bodies with no known location and the answer can’t be to just not investigate – so where a body may be irrecoverable and the coroner considers it appropriate to hold an inquest, the minister may order the coroner accordingly.” 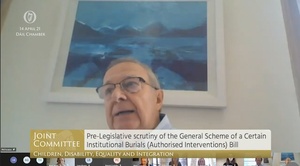 Phil Scraton, Professor Emeritus at School of Law in Queen’s University in Belfast

In response to a query from Labour TD Sean Sherlock, namely if the State passes the legislation in its current form, Ireland could be found to be in breach of Article 2 of the ECHR?

“…in relation to 70 years, I don’t know where that figure has come from? I don’t know how dreamt it up or why. But there will be an explanation I’m sure and administrative explanation. There should be no exclusion. I don’t believe that you can put a time limit on suffering. And I don’t believe you can put a time limit on lack of knowledge in relation to death.”

“The final point I really wanted to make is that I think if the proposed bill goes ahead in its present state, this will breach Article 2 of the European Convention [on Human Rights]. There’s no question in my mind about that…Article 2 takes the whole process to a quite different level. It’s an obligation and it has a series of obligations that are imposed on the State.

“…we have to accept that the coronial process currently in Ireland is not fit for purpose, even in its ordinary, every day workings. Our report that comes out next week will demonstrate that. Having said that, coronial investigation is crucial and central to each and every one of these identifiable deaths. And therefore, the process has to connect the families who are suffering this appalling loss over time, has to accommodate that, in the context of a full and thorough investigation which takes me right back to the point that we started on which is how they died.

How each individual died is crucial to every family, the specific circumstances. That is the point of an inquest, that is what an Article 2 inquest would actually seek to uncover and to meet therefore the Irish state’s human rights and domestic obligations.”

Earlier: ‘Tread Softly, For You Tread On The Bones Of My Family’

3 thoughts on “Absence Of Inquests”