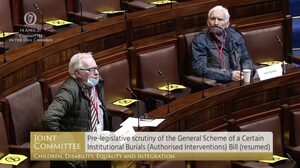 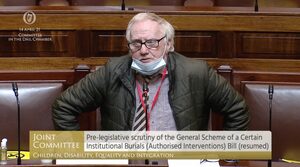 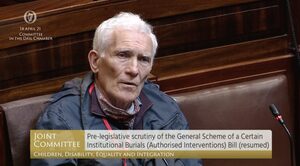 The Joint Oireachtas Committee on Children, Disability, Equality and Integration discussed the Institutional Burials Bill with contributions from solicitor Kevin Higgins and Peter Mulryan, both of the Tuam Home Survivors Network.

“… if this proposed bill was genuinely conceived as a measure to bring dignity to these children and a measure of closure to their families, it would probably would have been adopted on all sides and the need for pre-legislative scrutiny would not exist.

“To the members of this committee, I say: if you permit this measure to progress, you do so with your fingerprints all over it. And I believe you will come to regret it. This bill should be returned to whence it came. Nothing of worth, humanity or integrity, can be retrieved from it. I thank you, Mr Chairman.”

“Dignity is one thing and it’s become an overused word throughout this process. The thing I know is that I’ve been involved in this for the past 7 years and, whereas the commission has acted independently, I know of not one single solitary, substantial thing done by any agency of the State, and certainly by the Department of Children, which has made any difference whatsoever.

“Dignity and justice are inseparable. If you cannot give these children a bona fide death certificate… this Act which may decide, is essentially asking us in many ways: would we like roses around the mass grave or would we like bluebells? We don’t want either.

“These children, 25 per cent, according to the death certificates, died from something as nebulous as dibility. We’re all familiar with deaths too premature, births of children. The medical attendant certified that a child of three and a half, who never showed any symptoms of illness, had actually died of prematurity. Dignity without justice, justice without dignity, we need these children to be treated with respect.

“This bill, it’s a little bit like the Commission of Investigation Act. People say it’s not fit for purpose, it’s clearly not fit for anything. How many of them have been run into the ground?…”

“…I think the existing law is quite adequate. There is nothing to prevent, in the terms of Tuam with which I am familiar and which of course is perhaps the most documented, I would say that it is possible to excavate; it is many cases, from the oleo-archaeology I have seen, to carry out post-mortems; it is possible to reach, in many cases, a determination as possible or probable cause of death. And I think not leaving us behind collectively, this is not a matter just for survivors, the bill which created Mother and Baby Homes was something as innocuous sounding as the Local Government Temporary Provisions Act 1923.

“Just for your own benefit, deputy, I can tell you that bill was finally repealed in the year 2000. That’s 21 years ago.”

“Every time I go to bed I think of her….why am I left this way…is she dead or alive”

Tuam survivor Peter Mulryan tells the Oireachtas Children’s Committee of his strong opposition to the Industrial Burials Bill. He spoke about his search for his sister, Marian @rtenews pic.twitter.com/2jx6Ftdprh

“I would like to know where my sister is at this moment. I’m years now looking for records of my sister. Every time I go to bed at night, I think about her. Why am I left this way? Is she dead or alive? I do not know. The information I got is so scant.

“It is unbelievable they do this to a human being that was recorded as born as a healthy baby. And yet nine months later, she died. From what? Was it malnutrition? Neglect? Were they drowned? We don’t know?

“But I want to know, about my sibling, where she is now. I’m being denied all this information.

“Like to do that to an innocent baby. Now they’re trying to stop us to find out anything about where she is. And we’re denied and denied, it’s so inhumane to think that the present stated governments and what they are doing to us is beyond, beggars belief.

“I am so, so disheartened with it, that they’re still trying to make those babies suffer when they’re out there, soul-searching for their lives. To be brought into the world and to be incarcerated, and the same with my mother, what was done to her also. It’s horrendous. That’s it.”

Previously: ‘Tread Softly, For Your Tread On The Bones Of My Family’