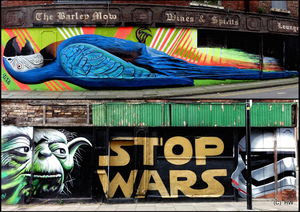 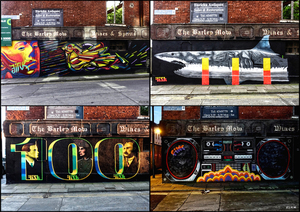 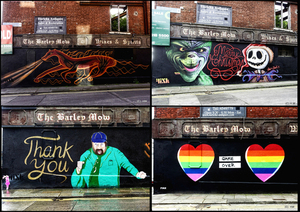 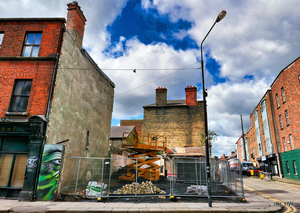 From top: Murals by street artist FiNK on the The Barley Mow (above) in Dublin 8, now demolished

A Corner of Francis Street.

I always feel a little poignant when I see another piece of auld Dublin disappearing. The old derelict building on the corner of Francis Street and Mark’s Alley West in Dublin 8 has been demolished. And like many such corners in Dublin it has a history to tell.

It was originally the site of the Barley Mow Pub. It has now been reduced to a small pyramidical pile of broken bricks, looking like the sad remnants of a miniature collapsed Inca temple. It is now being swept away as I write. There are only ghosts there now.

A new apart-hotel was planned for the site despite Dublin City Council’s initial refusal of planning permission, because it would, “exacerbate the existing overconcentration of hotel developments and prevent the delivery of residential development” and “the existing historic facades of the building should be retained or reconstructed in order to preserve the character of the Architectural Conservation Area”, but after the site was allowed to fall into dereliction, apparently safety works showed the building was beyond repair and Dublin City Council subsequently allowed it to be torn down. Once again exposing the inept failure of Dublin City Council’s mandarins to either protect structures or look after the best interest of its citizens.

In its hey-day the pub was a busy local when Gerry the barman was serving pints and toasting sandwiches for denizens of the Liberties and the proprietors of the Antique shops in Francis St, but like too many local style pubs across Dublin it closed its doors during the last property boom for development.

The pub made a good location for a movie and it was used during the filming of “Rat”, a comedic film about a Dublin bread-delivery man who is turned into a rat, starring the late great Pete Postlethwaite.

And about the pub’s name The Barley Mow? Apologies to all of the well-read seasoned beer drinkers but I only recently discovered what a “Mow” is, a barley mow is a stack (Mow) of barley, especially barley that was cultivated and then harvested. Barley is a grain that is of course, commonly malted for brewing beer.

In 1999 an offsite commission by the Project Arts Centre, a work by Tina O’Connell, “In Dublin”, used the recently shut but then fully intact pub for an innovative art project. Tina created the sculpture, a deconstruction piece, while on residency at IMMA, with support from multiple organisations including Irish Tar.

A room upstairs in the pub had a circular hole cut into the floor, after the upstairs windows were removed the artwork, a one-ton bitumen sphere, was brought in and placed upon the cut-out hole. The bitumen then slowly melted through the hole to the bar beneath. The private viewing audience allegedly took bets as to how long it would take before the melting bitumen would reach the floor below, if anyone made a bet on 4 hours then they happily won the wager. The art was afterwards opened to the public to view for the following 3 weeks. The pub was hoarded up and over the years the building slowly sank into a state of decay.

In recent years the superb artist FiNK (sic) created some excellent and original mural style artworks using the walls of the defunct pub as his canvas. I believe he had an agreement with the owner to paint his murals on the old pub’s walls. FiNK’s work was colourful, provocative and entertaining, long lasting and brought a vibrancy to an otherwise sad piece of dereliction. It is a pity that in the many areas of the city with similar hoarded up sites that they can’t be used as canvases for street art in a similar manner.

It is a shame Dublin has lost many of its old pubs. Many were closed for development as part of an emerging property boom in the capital in the late 1990’s and many also disappeared during the financial crash after the property boom. Perhaps Broadsheet readers would like to nominate and share a few memories of their favourite pubs that have ceased to be?

Unfortunately, I expect many of the recent pandemically and “temporarily” closed ones, will be unable to reopen due to financial difficulties when the pandemic finally eases. Only time will tell.

All photos by Harry Warren