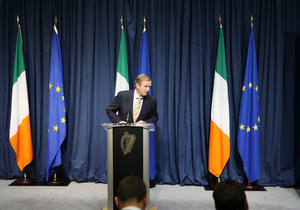 Then Taoiseach and Fine Gael leader Enda Kenny prepares to make a statement on the Brexit result on June 24, 2016

My poem in response to yesterday evening’s episode of Reeling In The Years deals with the Brexit referendum. I wrote this poem a couple of weeks before the vote. It is dedicated to my friend Darrell who lives in Portsmouth and was a big fan of the cheap French wine EU membership facilitated.

Exit
(for Darrell Kavanagh in his hour of need)

There will be no more thunderstorms
sent across the Channel by the French,
no acid rain floating in from Belgium.
Pizza Hut will offer a choice of
Yorkshire Pudding or Yorkshire Pudding.

You’ll spend the next twenty seven bank holidays
dismantling everything you ever bought from IKEA.
The electric shower your plumber,
Pavel, put in last week will be taken out
and you’ll be given the number of a bloke
who’s pure Billericay. Those used to caviar
will have jellied eels forced
down their magnificent throats.
Every fish and chip shop
on the Costa del Sol will in time
be relocated to Ramsgate or Carlisle.

All paving stones laid by the Irish
will be torn up to make work
for blokes who’ve been on the sick
since nineteen seventy six.
Those alleged to be involved in secretly
making spaghetti bolognaise
will be arrested and held
in a detention centre near Dover. Sausage dogs
will be put in rubber dinghies
and pointed in the general direction
of the Fatherland. Neatly sliced
French sticks topped with Pâté
will make way for fried bread
lathered with Marmite.

There’ll be no more of those new
names for coffee your gran
can’t pronounce. The entire royal family
will be shipped back to Bavaria, with the exception
of the Duke of Edinburgh who’ll be given
a one way ticket to Athens. Curry
will no longer by compulsory
after every twelfth pint of Stella,
which itself will only be available
by special permission of the Foreign Office.

We’ll give India back its tea, sit around increasingly
bellicose campfires in our rusting iron helmets,
our tankards overflowing with traditional Norse mead.