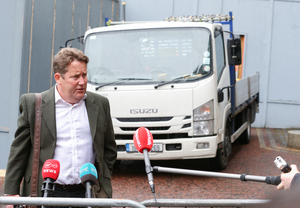 These include, Fianna Fáil’s future, Northern Ireland, defence/cyber security, and the old hardly annual: electoral politics. It is why opinion polls can be a useful grist to my mill. I say “can” as most of the polls published since last December have not – with the exception of one Sunday Times/B&A poll – shown much political movement.

The shifts in support between the parties over the past five months have been negligible. Across that time Red C has had Sinn Féin in a range of 27% to 29% and Fine Gael in an even tighter range of 29% to 30%. In effect, Red C polling has the two biggest parties in a continuing dead heat for first spot.

The range widens when you turn to Fianna Fáil. But is also drops. Like the proverbial stone. Red C has the party of Lemass in a range from 11% to 16%. If you treat Fianna Fail’s numbers as if they were high-diving scores (plummeting more like, says you), by removing the highest and lowest ones, the party ends up in the much tighter 13-14% range.

The story is much the same for the Ireland Thinks/Mail on Sunday polls held over the same time span. They, cumulatively, have Sinn Féin slightly ahead, putting it in a range of 27% – 31% against Fine Gael’s 25% – 28%. Once again, Fianna Fáil is behind, though not quite as far behind as RedC, on a range of 14%-16%.

Now comes my long standing and familiar disclaimer, when looking at national polls always remember that political parties do not do their polling in the same way as the national newspapers.

This is not to say that there’s anything wrong with these polls. It is just that they are not the best indications of how political parties will fare when they got the country.

This may give some comfort and succour to my former Fianna Fáil colleagues, or to Labour supporters hoping for a pleasant surprise from the Dublin Bay South by-election, but this is not my intention.

It is a basic truth of politics that if everyone who voted for you at the last election were to stick with you and not go out and vote for someone else at the next election but, you did not gain even one extra vote, then you would have fewer votes than the last time.

It’s simple maths. People die. They move on. They move away. So every party and every candidate needs to attract new voters from election to election, just to stay where they were. It takes forward momentum to just stand still.

Every party, and every independent, needs to attract new voters to refresh their voting pool. What the national polls have been showing, for over a year, is that Fianna Fáil is not doing this.
Even the slightly more optimistic Behaviour and Attitudes/The Sunday Times polls have the party below its poor 22.2% Feb 2020 performance, putting it on a range of 16% – 21% over the 4 polls it has conducted since September 2020.

But… as bad as the news coming from these polls is for Fianna Fáil, it gets even the worse… a lot worse… when pollsters ask the key question: who do you trust most on housing?
Those replies spell the end for Michael Martin’s Fianna Fáil, in the starkest terms.

The latest Red C and Ireland Thinks polls both asked this question, and both got similar results, albeit from differing sets of numbers.

When Red C asked which party was most trusted on housing and the rental sector, respondents said SF 29%, FG 19% and FF 11%.

They asked the same question about such other policy headings as crime, education, health, the economy, and handling Covid.

The disastrous news for Fianna Fáil is that it came third on all of them. One of its best ratings was on education, but even that was a feeble 15%, putting it far behind Fine Gael on 27%, and Sinn Féin on 21%.

The response on who voters trust most on Covid-19 firmly dispels any notion that Fianna Fáil will get a post Covid poll bounce. Though Martin as Taoiseach, and Health Minister Stephen Donnelly have been the theoretical public face of the government’s pandemic response since last June 27th last, when Red C asked who was most trusted on handling the pandemic, Fine Gael scored a massive 37%, compared with 19% for Sinn Féin and a paltry 12% for Fianna Fáil.

But it is the housing/ rental sector number that matters most as housing is once again the single most important issue for voters. It is now dominating and influencing voters’ thinking in the same way it did back in January 2020.

This was the point made by the last Ireland Thinks/Mail on Sunday. When it asked voters which of the three main parties they thought was best placed to tackle the housing crisis: 41% said Sinn Féin, against 22% for Fine Gael and 20% for Fianna Fáil.

While the individual ratings are different – partly accounted for differences in the don’t knows, but mainly by Ireland Thinks only enquiring about the three main parties, whereas Red C asked about all parties and groupings – the relative positions are clear and Sinn Féin’s lead on the single issue that matters most to today’s voters, is staggering. We can argue about whether that lead is merited, but the fact is that the lead is there, and it is growing.

Michael Martin’s Fianna Fáil now teeters on the brink of political decimation as it has gone from being the party [marginally] most trusted on housing in January 2020 (FF was on 24% then, while SF was on just 20%) to the least trusted of the three main parties.
But, in this dark reality lies the route to its potential recovery.

If – and it is an enormous if – Fianna Fáil can regain the trust of voters on its capacity to tackle the housing and rental crisis, then it can just about recover its electoral fortunes or, at least, recover them to the state they were at in January 2020.

It does this by convincing voters that it grasps the scale of the problem and has both the plans to address that scale and the political drive to deliver them.

This is a big ask from a party of government which seemed perfectly content in Cabinet to sign off on such minimalist measures as increasing stamp duty to 10% on purchases of more than 10 houses within a 12-month period to clamp down on the bulk-buying of new homes.

The dilemma for Fianna Fáil, and it is one that its current leader is now unable to address, is that it does not have a distinct and uniquely Fianna Fáil housing policy. The one it agreed at the Programme for Government with Fine Gael and the Green party has no clear or identifiable Fianna Fáil core. Any new one it tries to launch now is tainted on arrival if it is seen to have Fine Gael’s agreement.

Until Fianna Fáil can execute the necessary political changes to demonstrate that it both grasps the scale of the housing problem and can address that problem at scale, then it is fated to languish as the third out of three main parties… until a poll comes along showing it as the fourth out of four.

By that time it will be too late for the realists in Fianna Fáil to act.

Irish politics will then be treated to a decade long replay of the political stagnation which befell the UK in the 1970s, with a bleak binary choice of having either a government from the right, dominated by Fine Gael, or a government from the left, controlled by Sinn Féin. Each undoing the work of the other, dismantling more than they create, with no political middle ground party to call a halt to it.

Derek Mooney: A Government Bidding Against Itself

Derek Mooney: Important Week For Relations Across These Islands

7 thoughts on “Derek Mooney: There’s Only One Issue That Matters – And It Is Housing”