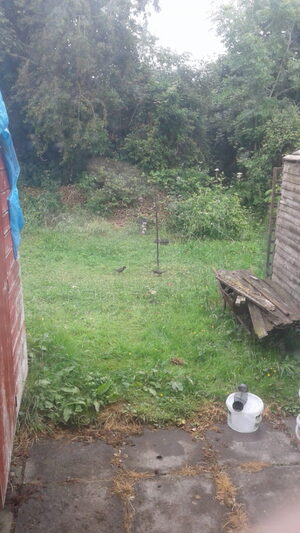 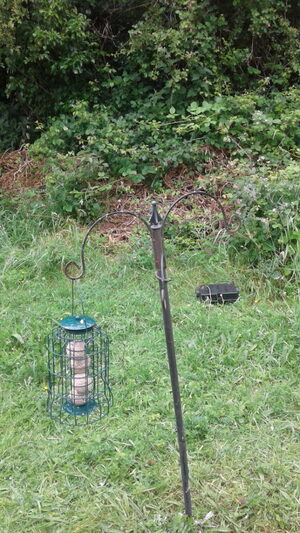 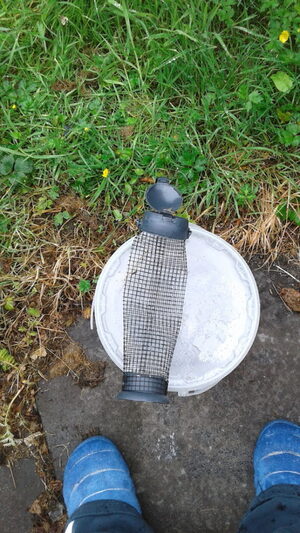 My crows did not turn up today. Rather unusual. I tried asking them when I saw them on the green later in the day, but they did not answer. They were poking around one of the areas where the teenagers had gathered, so I took that to mean crisps or even chips may have been had, and bits of food treasure were to be sought among the blades of grass.

And therein lay my answer. Starlings. I have been putting out fat balls for the little birds that live in my hedge, and my brambles and my thorns and nettles. I was told not to put out seed, as it may stop the little ones from foraging.

Wait until there is no fruit on the brambles, I was instructed. The fat balls help them when they are nesting, and as their young grow. I tried putting out peanuts, but that did not work. Actually, that was an eye opener. And a feeder opener.

I have a pole with curly arms for hanging out the feeders. The curls are supposed to keep the feeders from falling off. But those dastardly crows figured out how to lift the feeder off and drop them to the ground. All the easier to access them. The pigeons like to perch on the upper arms and poop all over everything below. Really, they have no manners!

I used to have a washing line strung across the garden where I would hang my washing in the summer, and in winter occasionally feeders. Unfortunately the pigeons would perch above my freshly washed duds, and poop. Making the whole fresh air smell pointless.

I bought a new peanut feeder. Last winter’s one was beyond redemption and in any case had provided years of good service. The one I bought, for all it had a metal mesh cylinder, to be honest it was cheap, and cheaply made. The crows landed on it. At first this was fine, but when the big lad arrived, his weight proved too much, cheap plastic split, and the feeder plummeted to the ground, lid spilling and a bounty of legumic delicacy spilt over the grass.

I bought a newer feeder, one more robust. I had hopes. Oh foolish me. I filled it up, hung it up and came back in for my 20th hand washing of the day (or so it seemed). And as I looked out my window above the sink I watched as the crows gathered, and deftly two of them together lifted the feeder up and around the curly bits and dropped it to the grass below.

It took a few attempts, but it was clear they knew what they were doing, and worked as a team. The big lad then dropped like a stone onto the mesh cylinder. After a few dive bombs, the cylinder collapsed, and the lid popped off. So much for sturdier.

The problem was that this largesse of peanut loveliness attracted a couple of somewhat unwelcome guests. Rats, and I will talk about them later, and starlings. I have rarely had to deal with starlings in my previous feeding, as they would mostly have already fled for warmer climes when I was looking to keep the little ones nourished through the winter. And starlings do not come in ones and twos. Anyone who has seen a murmuration will know that. Nope they come in flocks! They came for the peanuts, and found the fat balls.

The fat balls are in a different type of feeder, one with an outer cage so only smaller birds can get in. Actually designed to keep squirrels out, starlings are too large. But not uninventive. Or uncooperative.

They could get their heads in, and would peck at the fat balls, dropping morsels below, where others would feast. Then, the ones above would swap out, and the ones below would take up pecking duty. In full spate, they can empty the feeder in about 10 minutes, leaving only crumbs for the little ones and the pigeons.

The crows, clever divils that they are, figured out how to open the lid of the feeder, so filling it full invites a fairly short time before the top ball has been snarfed and wings its way to a nest, or eyrie, or tower somewhere to be shared.

Crows are surprisingly generous among themselves, but will censure any who do not share when they find caches of food. When the boss man arrives, the others will hop back until some signal tells them they may now come and feed. The bickering is always amongst the younger ones.

Oh, and crows really do not like magpies, or rats. The magpies are gluttons, I am not sure what their beef is with the rats. There are about 3 species of crows that frequent my garden: ravens, hooded crows and rooks. For all that magpies are also corvids, they are not welcome.

As I mentioned earlier, the peanut harvest on the sward brought in some unwelcome guests. Now, I knew they were there, my house butts onto a ditch, and the local lawn tennis club which plays on tarmac is beyond that. For all its urban designs, the town is still very rural, and ditches hide a million secrets, some of whom are rats.

But you can deter them. You can put down poison but that risks onward poisoning of those that prey on them, including housecats and small terriers, and owls. There are foods which they will not like and will keep them away. But to entice them, you have to make the nasty taste nice at first. Coating with peanut butter is recommended.

So today, I coated pellets with peanut butter. I hate peanut butter more than I dislike fish, and this tub was now no longer safe for human consumption. While I have put down the deterrent pellets for now, still the peanut butter is not okay. So it was with a feeling of joy that I pulled out my permanent marker and wrote POISON on the lid and jar.

I love peanuts, just not peanut butter. And Little Slightly had this irrational love of celery stalks filled with the stuff. Argh! At least her food was safe from me.

But likely not from starlings, who leave nothing behind such that even crows don’t come back.

All pics by Slightly