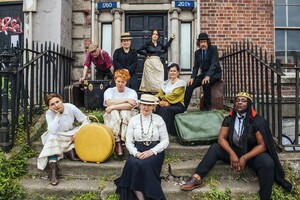 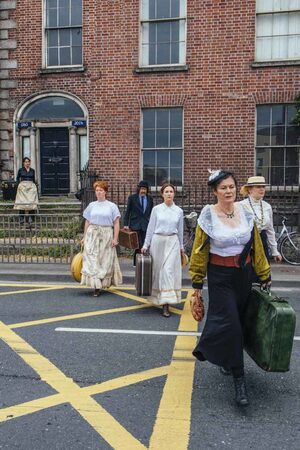 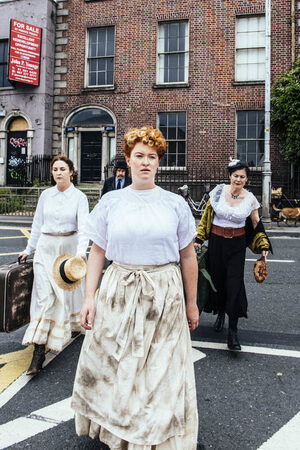 Irish actors protest against permission granted by An Bórd Pleanála for 15 Usher’s Island, the setting for James Joyce’s short story ‘The Dead’, to be turned into a 54-bed tourist hostel.

The photos depicts Joycean characters being evicted from the famous house to make way for the tourist hostel. This is emblematic of how our communities are being pushed out of the city by developers, vulture funds and ever-increasing rent hikes, making the city unliveable for many.

The house is the setting for James Joyce’s famous short story ‘The Dead’, often acclaimed to be one of the greatest short stories ever written.

The house, originally owned by Joyce’s grand-aunts, is a site of international cultural and literary significance and will be a huge loss to the cultural landscape of Dublin.

A letter from Academy Award winner Anjelica Huston, who played Gretta in her father’s film ‘The Dead’, was read out on the steps of the House…

As you may be aware, An Bórd Pleanála has just granted permission for no. 15 Usher’s Island to be repurposed in to a 54-bed tourist hostel. This four storey Georgian house, while the same as others along the Dublin quays from the outside, is exceptional. It is exceptional because within its walls lies the setting for one of the greatest short stories ever set down on paper, James Joyce’s iconic ‘The Dead’.

The house was owned by Joyce’s great-aunts, the inspiration for the Morkan sisters who hold a party in the house on the Feast of the Epiphany in the story. Joyce himself visited the house on many occasions, and it has miraculously survived through the years intact, almost exactly as it was when he himself graced its rooms.

‘The Dead’ is internationally acclaimed as a work of literary genius. For a site of such major cultural significance to be at the mercy of private owners is heart-breaking. I am writing to implore you to take all measures possible as Minister for Arts and Culture to preserve this site from becoming, as Joyce himself put it, another ‘shade’, lost forever.

As a UNESCO City of Literature, Dublin is championed internationally as a city of literary significance, and every year tourists flock to see the streets and places where the great literary works were based. The cultural sites that still exist should be preserved for visitors to the city as well as for the citizens of that fair city themselves. The House of the Dead is part of the rich fabric of Dublin, and must be protected.

My father John Huston directed the film adaption of ‘The Dead’ in 1987, and it was nominated for several Academy Awards. The house on Usher’s Island is the setting for that ethereal story to unfold, a story that has captured the imagination of so many around the world. As Minister for the Arts you have the power to preserve a vital part of our literary and cultural heritage. I beseech you to do just that.

All pics by Ruth Medjber

How Sandymount Strand Would Have Looked To Leopold Bloom

8 thoughts on “Dead As Doornails”