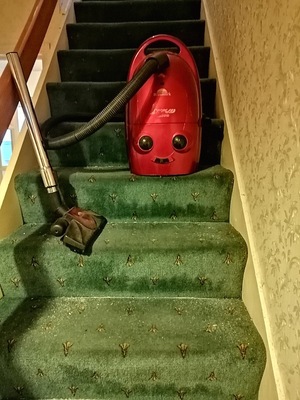 With a few weeks to go, the house is coming along and it is now safe to allow people to enter the house without a health warning. Carpets have been vacuumed: I’ll not comment on how many runs were needed until the sound of grit stopped. I definitely did the Elastigirl ‘Agh!’ and shoulder droop on more than one occasion. Floors have been washed and surfaces reclaimed from the depths of bachelorhood. Well, mostly.

In the front room, chairs and the couch have been rescued from the state of convenient flat surface and returned to a condition whereby I could invite a guest to take their ease. That annoying sticky patch on the kitchen table has been removed. I had cleaned a lawnmower carburettor on it, and the easing oil soaked through the newspaper I had down. Only been a month or so, so no worries. Tools gathered back together.

The old sofa has been removed from the shed, the old washing machine taken from the centre of the kitchen floor and removed to the shed to await repair, and the new freezer ordered. The old one may work, but something fuzzy in the murky depths cries out to be killed with fire. Instead, I will just replace it and have the supplier dispose of it safely.

Windows were opened wide, both for airing, and to try to gain some small sense of a breeze as the weather tried its best to render me down. Fresh smelly things were put in strategic places to cover potentially unpleasant odours. Being here all the time, I may not notice, but I did get a lovely sense coming in the door of brightness and airiness downstairs, and cool calming sleepiness upstairs. The young lady in the shop was very persuasive.

The new bathroom has been scrubbed, and will get at least another once over before the impending arrival. A new blue thingy has been put into the toilet tank and now the flush water matches her curtains. Who says men cannot colour coordinate? OK, maybe not what was meant, but I will take what I can. I may have to explain the intricacies of the ‘little flush’ and ‘big flush’ buttons, as she grew up around huge cisterns and using toilet bowls that are so full we would use that amount for a flush even in the old days. I never understood American style toilets from a design point of view.

When I had managed this feat, I mentioned it to my Little one. Her biggest fear was that I would do what her mother still gets her to do each week: scrub the room down with bleach. I was able to reassure her that such would not be the case. My first ever trip outside of Ireland was to Sweden. I sold my beloved Toyota Carina and set off to spend Christmas and New Year with two young ladies I had met and who invited me over. Apparently my rendition of the Green Fields of France under the stairs in Clongowes appealed to them. My abilities in face painting, while rudimentary, were sufficient to turn their costumes for the final party into something they thought was wonderful.

Anyway, when I arrived, for the first time in my experience I was in a bathroom with no separation for the shower. The entire end of the room was the washing area, with a very handy wooden bench to enable proper scrubbing of feet. Completely sealed with a robust vinyl covering that seamlessly covered the floor and walls, after you were done, a squeegee sluiced the water away and reduced soapy buildup. So now my shower has one, and the tiles and glass panels are sluiced down and deep cleaning needed less often.

I have showered in some strange places, with strange growths on the walls and, potentially, glow in the dark strangeness in the corners and ceilings. And that is here in Ireland! Thankfully, I have not had any such since the new suite went in (nor, indeed, in the old one), and I will ensure that there are none while my daughter is around. So long as she does her bit with the squeegee, I can manage the rest. I may even forgive her if she forgets.

And then I did it again! You would think I would have learned after the last time, but no. Without thinking, I picked up the Maasai rain stick to dust under it. To make matters worse, I dusted the stick itself. It took not kindly to this manhandling, and lo! the next day we had rain. Lots of rain. for lots of days.

It was so bad that the normally lovely Lilian Smith of Rising Time renown has threatened to come and find me. I currently live in fear of the doorbell ringing and a posse of irate radio presenters who struggled to raise the spirits of a nation while reading out those forecasts would be outside, egged on by the maligned meteorologists from Met Éireann. Not sure how the guys from Carlow Weather might react, but they tend to be more devious and clever in that part of the world, and may settle for unseating Kildare from the hurley league as revenge.

So the stick has been carefully returned to its place of display. I thought I should get one of those ‘Break Glass In Case Of Emergency’ wall boxes and ensconce the stick safely within. The sealed nature would keep the dust away, and the glass still allow me to show it off. Likely moving it from where it is into the box will bring precipitation, but hopefully only light showers as it understands what is happening.

A good friend suggested I put a sign on it to only break in the event of severe drought.I am thinking it may also be useful should I be attacked by Fire Elementals.

Slightly Bemused: Where Have All The Scooters Gone?