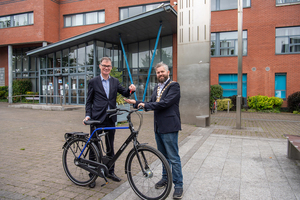 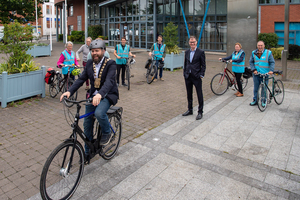 ‘South Dublin’s Mayor Peter Kavanagh was presented with his official bicycle by Dublin Cycling Campaign at a special handover ceremony at the Clondalkin Civic Offices on Wednesday morning.

The bicycle is a Dutch-style city bicycle, which was provided at cost price by the Dutch Bike Shop in Lucan. The bicycle, a Gazelle CityGo C3, is a robust city bike. It comes equipped with a sturdy rear carrier to carry all of your belongings.

The front and rear lights are integrated in the frame and are operated by dynamo, so batteries are a thing of the past. There is a ring lock on the rear wheel for brief stops but a sturdy D-lock is required for longer stops.’

Cleaning Up Their Act

11 thoughts on “Bike And Chain”