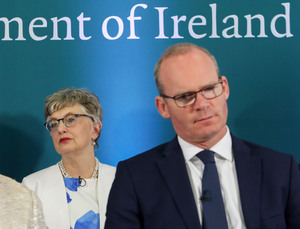 From top Minister for Foreign Affairs Simon Coveney (right) is facing a vote of no-confidence in the dáil over his handling of a UN envoy job to Katherine Zappone (left); Derek Mooney

Johnny Carson famously called Oscar night the time when Hollywood stars put aside their petty rivalries and brought out their major rivalries.

So it is with Motions of No Confidence. Oppositions set aside the boring business of holding ministers and governments to account to solely focus on scoring big political points.

Just like the Oscars, motions of confidence are about ritual and theatricality. This applies to both sides – opposition and government.

Opposition politicians who hope one day to become government ministers act outraged and appalled. Governments ministers, who were once opposition hopefuls, accuse their rivals of base cynicism and partisanship.

The script writes themself. Scroll back through no confidence debates of the past 50 years and you see the same formulaic lines pop up each time, just mouthed by different actors, few of Oscar-winning standard.

The first, and most serious, is the motion of no confidence in an entire government. Losing one will bring a Government down. It has happened twice: in 1982 and in 1992.

There have also been examples of where the prospect of losing a confidence motion has prompted a Taoiseach to head to the park and request a dissolution. This happened in the 1930s and the 1940s, twice in the 1950s and again in 1987. The November 1994 collapse of the Reynolds government almost qualifies. Though the confidence motion was tabled and never debated – as the Labour party left government – there was no dissolution or election.

The second type is the motion of confidence/no confidence in a particular minister. These are designed to cause maximum discomfort with minimal election risk. They are useful in helping an opposition party garner attention by putting the embarrassed minister in the spotlight and forcing unhappy government backbenchers, especially from other parties, to publicly back him/her.

But they are blunt tools, with many downsides.

Rather than focusing the public’s attention on the merits or specifics of the policy dispute, debates fast descend into four legs good, two legs bad style slanging matches.

The opposition drive to paint the miscreant minister as the most reckless public office holder since Caligula is met by an opposition chorus that the minister in the dock is a modern-day Albert Schweitzer, beneficently dispensing joy, and inner peace upon anyone they meet. The net result is another media process story about political personality clashes.

More counter productively for the opposition, the motion can also permit the government to draw a line under a problem by saying the matter has been debated to exhaustion and that all that can be discovered, has been discovered.

How many of us recall last November’s confidence motion in Leo Varadkar?  Very few I would suggest.

While we recall the allegation that Varadkar, as Taoiseach, leaked confidential Government information to a friend in April 2019, any detail we have comes not from the confidence motion, but from the two-hour question and answer session the week before.

The confidence motion itself threw up nothing new. All it achieved was to allow the issue slide down the media agenda. It also killed off the prospect of raising the matter in the Dail again for at least six months, as Dáil Standing Order 68 says:

“No member shall re-open a discussion on a question already discussed during the preceding six months.”

Though the same Standing Order does allow the Ceann Comhairle some discretion in applying a shorter period.

As yesterday’s lurid and unnecessarily salacious Sunday Independent headline reminded us, almost one year later and the Garda Síochána criminal investigation has yet to be concluded and a file sent to the DPP.

Though Minister Coveney’s allies may not appreciate the linkage or association, this week’s Sinn Féin motion of no confidence in him has some echoes of last November’s one in his colleague.

This week’s motion is not expected to yield any new information. And, just like last November’s effort, it follows an intense parliamentary interrogation that left several key questions unanswered.

Make that two 2-hour sessions. Minister Coveney needed a second round of questioning at the Foreign Affairs committee to repair some of the damage caused by his first shambolic appearance.

Though Coveney has addressed some questions, others remain. These concern his approach to retaining records of texts and his interpretation of what constitutes a job offer. He has also left the Tánaiste with questions to answer.

The first set relate to what he believes constitutes lobbying and how his office treats Freedom of Information requests. The second set concern to his role as Fine Gael leader and his party’s approach in government to collective responsibility and cabinet confidentiality.

For example, has the Tánaiste briefed the Taoiseach on the discussions he had with the Fine Gael minister believed to be behind a damaging Government leak? Indeed, has the Taoiseach, who has ultimate responsibility for the conduct of Cabinet meetings, followed up on these discussions?

Ironically, opening the November 2020 motion of confidence in the Tánaiste, An Taoiseach Micheál Martin said:

“The Tánaiste has acknowledged his error… Lessons have been learned all round and Ministers realise such situations should not occur during this Government.” [my emphasis]

But it did happen again. Within three months of the Taoiseach uttering these words Fine Gael ministers were demonstrating how little they had learned and were back to acting as if this was a single party Fine Gael government and Martin was a non-executive chairperson charged with presiding over some unimportant board meetings.

Now the Taoiseach, who seems incapable of chiding Fine Gael ministerial miscreants, is threatening members of his own party by telling them that anyone who does not back Minister Coveney in the vote will face greater penalties than Minister Coveney ever will.

You would have hoped that even uttering these words would have triggered some sense memory in Mr Martin’s brain that he is also the leader of Fianna Fáil.

Seemingly not. He is yet to acknowledge that it was the Fianna Fáil members of the Foreign Affairs Committee, particularly Deputies Cowen and Lawless and Senators Ardagh and Wilson, who conducted the most productive questioning of Minister Coveney.

So, seeing that it was his Oireachtas party colleagues who did so much of the heavy lifting in ensuring Ministerial accountability, might it not be wise move for a Taoiseach, who told the Dáil on Feb 15, 2017 that:

“…every Deputy elected to the Dáil has a duty to do everything possible to make the Dáil work. We reject the idea that the only roles we can play are to support Government in everything or oppose it in everything.”

To follow the sound logic of that approach and request Minister Coveney to come before a Fianna Fáil back bench committee and give them the assurances they need to publicly vote confidence in him?

This should not be done without political threat. It should not be an appear before us or else we shaft you, but rather the reasonable action of an equal partner in government. A partner’s whose thrust has been undermined by Fine Gael gameplaying.

Lest you fear I have gone all Pollyanna; I think Sinn Féin’s confidence motion is ill-judged. Not because I want to see Coveney get away with his laissez-faire approach, but because I fear we will see last November’s history repeat itself.

As I believe Sinn Féin’s move ill-considered, it follows that I think Fianna Fáil TDs would play into the Shinners hands by voting against Coveney, or even abstaining, no matter how aggrieved or angry they feel.

The leaderships of Fine Gael and Sinn Féin are busy playing brinksmanship politics while the Taoiseach is preoccupied with the trappings of office. Meanwhile there are just a few grown-up politicians around the place. Most do not hold high political office – for now, but it is to them we must turn to get through the next few months.

2 thoughts on “Derek Mooney: A Brief History Of The No-Confidence Motion”