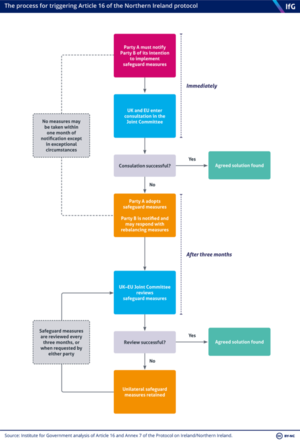 Tony Connelly of RTÉ News reported that the European Union is likely to challenge on legal grounds any move by the UK to trigger Article 16 of the Northern Ireland Protocol.

Although the UK government has repeatedly threatened to trigger Article 16, saying the conditions have already been met, the European Commission does not believe that to be the case, and would challenge any triggering of the article on legal grounds.

While details have not been shared with member states, it is understood the European Commission is preparing a hierarchy of responses should London trigger Article 16.

“The commission is internally of the view that Article 16 could happen at any time, that it hasn’t gone away, that it’s a very serious possibility,” says one diplomat familiar with preparations.

It is understood the European Commission is working on a twin-track approach, on the one hand bringing forward new proposals that would ease the implementation of the protocol, while on the other hand preparing a response to an Article 16 move

EU likely to challenge any move to trigger Article 16 (RTÉ)

The Fractured Façade in Finsbury Park That Looks Like Norn Iron

A Nation Once Again

Supremacism In The North Must Fall