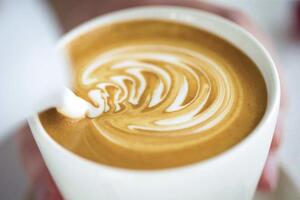 LoyLap, an Irish company specialising in digital payments and customer engagement software for businesses, has today revealed that ‘flat white’ coffee is Ireland’s favourite cup of brew, based on new research data.

To mark World Coffee Day (October 1st), LoyLap dug deep into a quarter of a million of payments transactions to reveal the ‘flat white’ is a firm favourite among Irish consumers.

The popularity of flat whites was highest in Leinster, while ‘macchiato’ was found to be the least popular beverage in Ireland, where it accounted for just 0.5% of all coffees purchased.

Following closely behind is ‘cappuccino’, with ‘latte’ and ‘americano’ rounding off the list. Interestingly, according to the data, latte is regarded as 24% less favourable than ‘cappuccino’ with ‘americano’ 19% less popular than ‘latte’.

The payments data was analysed across 250,000 transactions between January 1st – September 20th of this year.

When Hope And Barista Rhyme