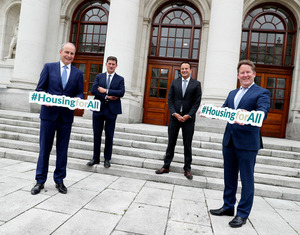 At top from left: Taoiseach, Micheál Martin, Tánaiste and Minister for Enterprise, Trade and Employment Leo Varadkar TD, Minister for the Environment, Climate, Communications and Transport, Eamon Ryan TD and Minister for Housing, Local Government and Heritage, Darragh O’Brien TD at the launch of Housing for All – a New Housing Plan for Ireland; Derek Mooney

After weeks spent playing catch-up on the self-inflicted mess that was Zapponegate, ministers and advisers will be relieved to be dealing with real hard political issues.

And there are no shortage of them. Over the next ten days we will see the fruits of their behind-the-scenes labours delivered via two major announcements. The first comes today with the launch of the National Development Plan (NDP). The second comes next week with the October 12th Budget.

Political convention suggests that the long-term political fate of this government rests on the success of these two events, plus the Housing for All package announced last month. But political convention hasn’t been right for a while, and there is no great reason to thank that is about to change.

Though the NDP overshadows the Budget when it comes to the amounts involved, it will be a decade before we start to see if it is working or not. The NDP is the political equivalent of planting trees in whose shade you will never sit, though here it is more of a case of politicians delivering infrastructure for which they’ll never get the political kudos.

But there is another reason why next week’s Budget may matter more in the short run. In terms of personal and political prestige this Budget will be Micheál Martin’s one great chance, over his remaining 62 weeks as Taoiseach, to put his own mark on this government’s legacy.

Though he will hope to still be in situ for next year’s Budget, he will be into the lame duck stage by then. He will oversee the budgetary negotiations phase as Taoiseach, but officials and colleagues will know that he will not there when it comes to its implementation.

As last year’s Budget was largely dictated by Covid, this is the only one whose drafting, crafting and implementation Martin will see through from start to finish. So it is vital for Martin, and for his constituency colleague and putative successor, Public Expenditure Minister Michael McGrath, that the pundit reviews hail it as a Fianna Fáil driven budget.

Martin’s proclivity for saying that every issue from housing to health to transport is “key”, is worrying his troops. Thus you see Fianna Fáil backbenchers raising the stakes, fearful that the far from electrifying Housing for All launch, about which I opined a few weeks ago, will be followed by a Budget that fails to deliver on the handful of commitments made at the 2020 election.

Fianna Fáil representatives from across the party are demanding significant increases in pension and other key welfare rates. Their very public calls were calculated to put pile the pressure on both Martin and McGrath, though arguably the case for hefty welfare increases was even better made by the string of recent energy price hikes.

This is not to say that today’s NDP does matter to the Fianna Fáil side. It does, but there is a sense that the NDP has been more important for the Greens and Fine Gael, while Fianna Fáil politically focused on Housing for All.

Nonetheless, the NDP is a big ticket item for all three parties. It earmarks €165 billion of investment in key infrastructure projects over the next decade. The new plan, is a major expansion of Fine Gael’s own 2018 – 2017 National Development Plan, a plan that came with a mere €116 billion price tag.

We should know later today how much more bang those extra billions of bucks will deliver. But the three party leaders should stop and recall that the 2018 NDP, which was hailed by Leo Varadkar and Pascal Donoghue as the plan to “transform the experience of all of our daily lives over the coming years” failed to halt Fine Gael’s electoral decline. Fine Gael lost votes and seats in the February 2020 election – a fact that somehow still seems lost on some of them.

Actually, it is less a school of thought and more a school of hard knocks. I mean, how credible does announcing a €165 billion plan sound in a week when ministers are being warned of rolling power cuts this winter and Eamon Ryan is telling Dubliners they will have to wait 13 more years for Metro Link?

The Dublin Metro Link was not just a priority in the 2018 NDP, it was estimated for completion by 2027, at a cost of €3 billion, alongside a major expansion of the Dart, electrifying the track all the way to Drogheda, Celbridge and Maynooth – all by 2027.

So, is it the wisest of political moves to continue to have lavish launches of grandiose plans whose targets and numbers the punters tend to neither believe nor trust?

The question is rhetorical. It is also unfair. It is, of course vital, that governments think beyond the 4 to 5-year electoral cycle and make plans for the decades ahead.

We need 10 and 15-year plans. We need ambitious targets, but they should be based as much on past performance and experience as they are on political hopes and desires.

They should also informed by the realisation that distrust in our political institutions is rising and that this creeping political populism will not be abated by institutions just promising more and more, particularly when its populist opponents have the potential ammunition to portray it as delivering less and less… as Mary Lou McDonald did last week on affordable housing.

Speaking of populism, be prepared to watch it being dialled up on Brexit this week as the Tories gather for their party conference. Expect plenty of calls from fringe meetings and even the main hall for the British government to involve Article 16 of the Northern Ireland Protocol with the aim of scuppering it.

The former Tory leader and minister Iain Duncan Smith (deliciously christened Irritable Duncan Syndrome by the late Jeremy Hardy) was urging Boris Johnson to do this last week. Even more moderate and measured pundits, such as Theresa May’s former Special Adviser on Europe, have speculated that the Tories could use the Conference to announce such a move, hoping to suspend parts of protocol around border controls and move checks away from the Irish Sea and back to the border across the island.

While they may not trigger Art 16 this week, there is a growing sense that Johnson’s government is set to play the Unionist card in the coming months as both a means of deflecting public attention from the impact Brexit is having on supermarket shelves and petrol forecourts and as a first salvo in his foreland battle to stop Scotland’s progress to independence.

Not only have we seen the DUP upping the ante by boycotting North-South Ministerial meetings (a flagrant breach of their ministerial pledge as pointed out by Fianna Fáil’s Jim O’Callaghan and the SDLP’s Nicola Mallon) we also have a former UKIP and Brexit party MEP, Ben Habib calling for the British army to be sent to Northern Ireland to prevent a “creeping Irish unification”.

It seems that Habib, who is the latest Brexiteer to discover a passionate interest in Northern Ireland by way of the Protocol, hasn’t noticed that British Army is far too busy delivering fuel and coping with Brexit shortages to go anywhere.

Derek Mooney: It’s Not Just Loyalty – It Is Loyality

5 thoughts on “Derek Mooney: Maybe We’d Believe Them More If The Numbers Were Smaller?”