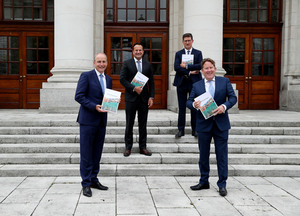 From top, left to right: Taoiseach, Micheál Martin, Tánaiste and Minister for Enterprise, Trade and Employment Leo Varadkar , Minister for the Environment, Climate, Communications and Transport, Eamon Ryan and Minister for Housing, Local Government and Heritage, Darragh O’Brien at the launch of ‘Housing for All’; Derek Mooney

At the end of July I said that come September I would be back and ready to offer my thoughts on what’s happening on the Irish political scene.

Well, I am back, but little did I imagine we would see so much political activity in August. Like many I assumed that politicians from all sides who have – to be fair – endured a difficult 16 months, would leap at the chance of a having a calm and uneventful August.

I was wrong. I failed to the factor-in the capacity of Fine Gael’s officer class to completely overestimate their own guile and ability and to fatally underestimate the public’s impatience with the appearance of ministerial entitlement.

Though the Taoiseach and his allies, more of whom are in Fine Gael these days than in Fianna Fáil, may want to portray #Merriongate/#Zapponegate as a silly season story that is not resonating with the public, his TDs know that’s not the case.

Voters may not be across the minutiae of who said what, to whom, in what text and over what platform… but who is? The stories and sequences coming from the Tánaiste and the Foreign Affairs minister seem to change every couple of days.

But voters are seeing this episode as characteristic of a government that seems remote, detached and more focused on its own issues than theirs.

Martin’s protestations at last Thursday’s Housing for All launch that the whole affair was unimportant, and that the media was treating it as a melodrama, would be less unconvincing if he hadn’t been one of the first to make this an issue by saying he had been “blindsided” by Fine Gael at Cabinet.

Like it or not, that attempt by Martin to explain how and why he, as Taoiseach, hadn’t the political sense to send the appointment back for reconsideration, or consultation with an Oireachtas committee, helped launch this long running saga.

By the way, do a Google search for “Martin and “blindsided” and you will see how often this Taoiseach finds himself the victim of others blindsiding him, be it on vaccines by the EU, by the EU on the Northern Ireland Protocol or by NPHET.

Last January I said here that normal politics wouldn’t resume in this country  until what are known as the wet bars, i.e. pubs that do not regularly serve food, were fully reopened.

As I also explained last March how this was not because politics is so linked to drink that you can’t have one without the other, but rather that pub re-opening was expected to be one of the last pandemic restrictions to be lifted and was likely to coincide with large groups – such as Oireachtas parliamentary party groups – being able to again meet face-to-face.

Next week we see that happen when the Fianna Fáil parliamentary party has its first significant non-virtual meeting in over a year. A meeting that should have taken place last week.

While TDs and Senators have had regular Zoom /online meetings over the lockdowns, these have tended to be quite one-sided with the Taoiseach and Ministers more in broadcast than listening mode.

The other major issue with these virtual encounters has been the fact that so much of what was said, and a fair smattering of what was never said, ended up on social media, that many back benchers opted to self-censure, or even to avoid contributing altogether.

The return of face-to-face single room meetings will not only facilitate open and frank discussion of the frustration many within the parliamentary party feel with both government performance and the party’s own poll ratings, it will also allow less opportunity for the proceedings to be relayed outside.

The issues are many. From the unwarranted delay in publishing the Fleming report into the disastrous 2020 election; to the party’s dismal performance in the Dublin Bay South by-election; to its languishing in the mid-teens in the polls; to the prevailing belief that Fine Gael is continually wiping Fianna Fáil’s eye at the cabinet table and that Martin applies double standard on ministerial responsibility to the detriment of his own party colleagues.

#Zapponegate speaks directly and substantially to this latter point, though not as dramatically as the finding in a Mail on Sunday/Ireland Thinks poll published on August 22nd that only 25% of voters think the Taoiseach, Micheál Martin has the most influence on the direction of government policy. A massive 54% said that Leo Varadkar had most influence – note that they did not say they welcomed this.

Martin repeatedly telling colleagues that 75% of his party membership backed the deal with Fine Gael and the Greens is cutting no ice with his parliamentary colleagues. Well over 90% of them backed that deal. They did more than just back it, they used up a great of local goodwill to persuade very uncertain supporters to do likewise.

What they need to know now is where is the clear Fianna Fáil stamp on this government’s policies and actions.  They were expecting to see some of that last Thursday with the Housing For All plan, but what they saw was a Fianna Fáil Taoiseach who thought it was vital to bring a speech justifying the sacking of a party colleague to a landmark Fianna Fáil policy announcement.

Not only did they see and their own leader needlessly rising to the media bait, sabotaging the news coverage of the plan he was there to promote, they then had to listen to him justify his actions saying, “I didn’t show up here with a speech, I came here well-resourced with material…”. A distinction without a difference.

And to add salt to the wound they had to endure the Tánaiste follow up on all of this by shamelessly rewriting history and denying that there were housing shortfalls under Fine Gael. Shortfalls that turned a housing crisis into a housing emergency.

I have said here many times that there is one issue that matters more than any other in politics right now and that is housing. In May I warned that:

The dilemma for Fianna Fáil is that it does not have a distinct and uniquely Fianna Fáil housing policy… Any new one it tries to launch now is tainted on arrival if it is seen to have Fine Gael’s agreement.

To Darragh O’Brien’s considerable political credit, he and his small team of political advisers have succeeded in delivering a housing program that is funded, well researched, thorough, and grounded in reality.

He was an effective advocate for his program on TV and Radio on the night of the launch, demonstrating a strong grasp of detail and an ability to deal with #Zapponegate questions without throwing party colleagues under buses.

But does the plan contain enough to convince voters that Fianna Fáil both grasps the scale of the housing problem and has sufficiently ambitious plans to address that problem at scale? I doubt it.

There is much that is good in the Housing For All series of documents, but my big fear is that the target of addressing the crisis over 9-10 years, combined with a housing output (new builds) delivery timeline (2022 – 2030) that backloads the delivery (24,600 new homes in 2022, compared to 40,500 homes in 2030) does not convey a sense of Fianna Fáil fully grasping the scale.

Any glitches or hiccups in years one or two and housing will be as big a political issue at the last election as it was at the last one – and that can only spell disaster for Fianna Fáil. Indeed, it is arguable that even without any last-minute problems, that the year one and year two targets are so low as to mean that housing could be an issue anyway.

Be in no doubt. Martin and Varadkar’s individual futures as leaders of their parties hang in the balance now that normal politics is resuming. The news that their respective parliamentary parties can meet again is bad news for both men, and while neither seems to be handling it well, it looks like Martin has the most to fear, right now.

I am convinced that more Fianna Fáil TDs want Martin gone than want him to stay. The number still sitting on the fence has dropped dramatically since before the Summer and I doubt there is anything Martin can say to over the next days and weeks to convince them to save his skin.

We are in the endgame.

9 thoughts on “Derek Mooney: The Endgame Is Near”