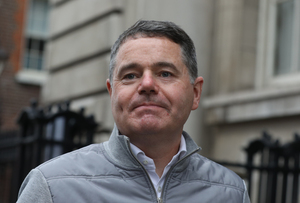 Minister for Finance Paschal Donohoe outside government buildings this morning

The cabinet will discuss whether Ireland should sign up to global corporation tax reforms that will see our ‘cherished’ 12.5% rate increased to 15%.

The deal brokered by the OECD offers little choice.

The plan proposes changes to where companies would pay their taxes, that the Department of Finance has estimated could reduce Ireland’s tax take by €2bn a year.

The 12.5% tax rate has been a cornerstone in Ireland’s successful foreign direct investment offering for decades and has been fiercely defended by successive governments.

While it accepted parts of the plan governing where companies should pay their tax, it objected to the reference to a global minimum tax rate of “at least 15%” being included in the plan, arguing it created uncertainty because the phrasing would mean the rate could be increased further at a later date.

Never Go Against The Family

2 thoughts on “Out With A Whimper”