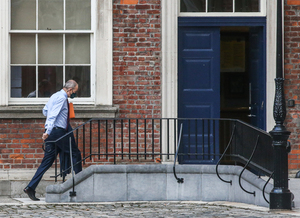 As I have mentioned before, the truest rule of politics is Lyndon Johnson’s “never tell a man to go to hell unless you can send him there.”

It recognises that today’s enemies may be tomorrow’s allies, while warning that hollow threats only expose the weakness of those making them.

My second favourite political saying is:  “You buy your colours on your way into a match, not on your way out.”

It comes from someone a million miles away from LBJ, the Yellow Rose of Finglas, the late Jim Tunney. Tunney was a junior minister, Lord Mayor of Dublin and a Fianna Fáil TD for 23 years. He prided himself on his absolute loyalty to his party leader, especially Charlie Haughey.

Not only had Tunney a penchant for quoting himself, he did it in the third person. He uttered the phrase less as a strategy and more as a self-description, especially when defending his decision, as parliamentary party chair, to hold open roll call votes, rather than secret ballots.

Though this had the effect of legitimising the arm twisting and bullying of TDs, buying your team colours on your way in still works as a guiding principle. It is better when politicians declare where they stand on the big issues in advance, rather than waiting to see what way the wind blows. This is particularly true for those who have attained positions of great leadership.

I added “attained positions of leadership” codicil as I am not so naïve to imagine that even the most righteous aspiring leader doesn’t need to duck and weave as they climb the greasy ladder.

So, where am I going with all of this, you ask? Well… Tunney’s phrase kept popping into my head as I mulled over the government’s decision to send both Minister Simon Coveney and Government Chief Whip Jack Chambers to the well-intentioned, but ill-considered, Church Leaders’ service in Armagh.

I made the arguments against the Irish Government attending the service here three weeks ago. Put briefly: I don’t object to the service and can see why the Churches think it fine. I no problem understanding why Unionists and Loyalists wish to celebrate Northern Ireland’s foundation. Why should I? Its creation is a basic fact of this shared island’s often sad history.

But I do have an problem with the idea that making a gesture is more important than our elected leaders staying true to who they are.

The purpose of commemoration, especially the commemoration of events that were divisive, is to encourage all sides to broaden their sympathies without requiring them to abandon beliefs or allegiances.

To Tunney-fy it, you don’t buy both sets of colours on the way in or way out of the match just to convince the other team you’d be just as happy if they won.

They simply won’t believe it and they also won’t respect you. Yet it seems that is what we have done in agreeing to send Coveney and Chambers… or should I say, half done.

If the intention of sending both ministers was to show governmental bipartisanship why send one senior and one junior? Why not one send one of the five Fianna Fáil senior ministers at the Cabinet table alongside Coveney? Why pick Jack Chambers and not Norma Foley, Michael McGrath, Charlie McConalogue, Stephen Donnelly or Darragh O’Brien?

Did the exalted five decline the poison chalice knowing the problems they would stir up for themselves with supporters and back-bench colleagues if they accepted?

Was Jack Chambers just the poor unfortunate who was holding the passing parcel when the music stopped? Or did Micheál Martin conclude that Chambers, whose much snapped visits to sports facilities across the country filled the Instagram timelines of countless TDs and Cllrs, might “benefit” from close association with his latest unpopular position.

We might never know… or care. But whatever the reason, no one could hail it as bold. But then neither boldness nor bravery in decision making were traits much associated with Micheál Martin. I know this is not how Martin’s supporters see it. I can almost hear them hailing his Repeal the 8th position as an example of him leading from the front, as I type.

It is a very fair claim. He did take a clear position. It was one that did not find favour with most in his own party. And, as we saw with the “informed” partial leaks from the party’s internal report into its dire GE2020 showing, many around Martin still blame that on TDs not backing Martin on Repeal the Eighth.

But things are not that simple. It wasn’t until the publication of the full report that it emerged that Fleming’s committee had attributed the GE2020 failures to a far wider range of factors.

The report pointedly remarks that Fianna Fáil’s position on Northern Ireland today does not differ significantly from other political parties. It also laments the dominant role played by full-time “officials of the Party” both in election management and manifesto preparations.

It also cites the December 2018 extension of the Confidence and Supply Arrangement with Fine Gael, a solo-run Martin decision which his supporters are less keen to mention, and the finding that “the majority of [party] members are unclear about our distinct identity.”

Let’s focus on this last finding. Notwithstanding the passivity of the language, the finding itself is shocking. It means that the party’s leadership has failed over the past decade to give members a concise vision or message to differentiate Fianna Fáil from other parties.

So what chance do these members, who select the candidates, have in convincing the voters?

At the 2020 election Martin failed repeatedly to define Fianna Fáil, so Sinn Féin did it for him with a definition that said there is no difference between Fine Gael and Fianna Fáil. It was a dishonest portrayal, but Martin’s actions since the election have only served to encourage it.

A political party’s definition and identity comes from the leader. The leader gives expression and substance to the party’s defining characteristics. They embody what is different or unique about the party.

It is what Fianna Fáil has done across its history. Rather than referring to the first, second, third or fourth Fianna Fáil periods in government, we speak of the de Valera, Lemass, Lynch, Haughey and Ahern eras.

These leaders embodied the party’s identity. But they also drove it. As you look back you can see how that identity matured and evolved according to the challenges and demands of the time.

Thus Lemass serves loyally in the more protectionist de Valera governments, but then seamlessly leads Fianna Fáil to championing modernisation and expansion, promoting a new generation of leaders from O’Malley to Lenihan to Haughey.

It is remarkable that the self-identifying historian Martin chooses not to learn these important lessons from his own party’s history.

Instead his considered response, as leader, to his party’s parlous position is to disavow any role or responsibility in setting the party’s direction, choosing instead to set up a special commission to “review the aims and objectives” of Fianna Fáil.

So, Martin has boldly and bravely sub-contracted out a critical leadership function to a 12-person commission. A commission consisting of 4 TDs, 1 Senator, 3 Councillors, 3 membership reps and one of the aforementioned “officials of the Party” mentioned in the Fleming Report. All chosen by him.

Martin has now declared himself entirely content to allow a random committee to define tomorrow’s Fianna Fáil. While it is undoubtedly better that it be done by a group appointed by him rather than allowing Fine Gael and Sinn Féin to continue to do it, it is still a craven abrogation of political responsibility by Martin.

The fact that the leader of Fianna Fáil is no longer bothered about when he buys his team colours shouldn’t shock us, but neither should he, or his supporters, be surprised that fewer new people are looking to don his team colours either.

Ye know @broadsheet_ie there might be a small problem. Is the 'Government' going to a gig to which they haven't actually been invited? And can they be said to be representing the State? https://t.co/ez0UhtNkuU

Derek Mooney: Mandate Is Not Another Word For Majority

Derek Mooney: We Need To Talk About Micheál