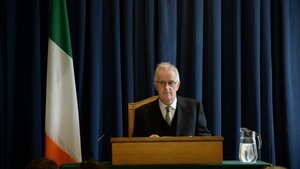 It’s understood, as things stand, these were the tribunal’s final witnesses.

The tribunal heard that, as of this afternoon, there has been no call by any legal team for anyone to be recalled.

Before finishing today’s hearing, Judge Charleton listed 20 questions that he said the legal teams may wish to consider ahead of making submissions in relation to the final module.

Judge Charleton said he will meet with the tribunal’s legal team in the Four Courts on Monday morning and then may hear these submissions on Wednesday.

1. What kind of talk, communication or innuendo can fairly be said to come within the terms of reference? What is the full extent of any calumny or detraction against Maurice McCabe that should be regarded as proven as a matter of probability?

2. To what extent are political, journalistic and Garda rumours or talk necessarily to be considered?

3. Is there any truth in the protected disclosure of Superintendent Taylor? Is he a witness whose evidence in any respect can be accepted? Should it, as a matter of prudence, be subject to a corroboration/caution warning?

4. Is it possible to tell from a false denial, for instance, but not limited to Superintendent Taylor or to any journalist, that the opposite to an assertion is in fact the truth?

8. Of what relevance are the allegations of Superintendent Taylor as to his phones and the seizures thereof? That includes all electronic devices.

10. Why were the disciplinary proceedings against Superintendent Taylor withdrawn and what are the terms of that withdrawal and the termination of the High Court proceedings?

11. Is there any inference to be drawn from changes of phones, loss of computers or phones, or failures to remember pin numbers by Commissioner Callinan, Commissioner O’Sullivan or Superintendent Taylor? Is there any other phone or computer evidence of relevance?

12. To what extent, if any, can the allegations of John McGuinness TD, Philip Boucher-Hayes, Seamus McCarthy, Comptroller and Auditor General, and John Deasy TD be relied on, and even though merely guided by the rules of evidence and not bound by them, is this Tribunal in a position to say that they corroborate or support each other?

13. If these are to be believed or accepted as probable, what is the full extent of the allegation of calumny against Maurice McCabe? Is Superintendent Taylor reducing his role and if so, does this factor lessen or completely dissolve his credibility?

14. What led to the visits of Debbie McCann, Eavan Murray and Paul Williams to the home of Ms. D? In that regard, has journalistic privilege been properly and honestly relied on and is there any evidence proffered by these parties that is reliable? What in truth happened? Did the visits have any Garda inspiration?

15. To what extent, if any, does the evidence of the D family members remain relevant?

17. What is the relevance of question 5 as to any incorrect or dishonest invocation of journalistic privilege?

18. To what extent do journalistic clashes, seven of them now today, apart from that between Alison O’Reilly and Debbie McCann, require to be resolved or even recorded in a report to the Houses of the Oireachtas? And if so, Why?

19. To what extent does the Tribunal have to report on or comment on political involvement or the actions of any individual public representative?

20. Going through the terms of reference, the parties might be so kind as to precisely and concisely give an answer to what each party regards as having been supported by probable evidence.

After reading out his questions, Judge Charleton said:

“So, that is just an indication of thinking, it is no more than that. It may help, it may not.”

The George Bernard Shaw line, quoted by Judge Charleton was that “the altar upon which Irish martyrs are consecrated is the gallows“.