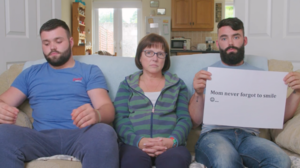 Kathy Ryan, from Tipperary, and her sons Andrew and Matt call for more Government support for dementia care at home.

According to the Alzheimer Society of Ireland, there are 55,000 people living with dementia in Ireland – 63 per cent of whom live in the community.

Between 2009 and 2015, Government funding for long-term residential care increased by €84 million, while funding for home care decreased by €11 million.

Today the ASI is launching its pre-budget submission 2017 and is calling for the Government to invest €67million for home care supports for people with dementia.

The ASI has also launched a petition asking for people to support this call.